All Change Day - Where We Come From

- February 20, 2019
One of the things that the Head at the Primary School both Top Ender and Dan Jon have attended over the last few years (7 years each, well it will be this July for Dan Jon) put into place not too long after she became the Head, were these days where the entire School gets turned on it's head a little.

All seven years of the School mix together and learn together, divided only by one of the four house groups. The older students with siblings in the school, get to help their siblings, students like Dan Jon get to hang out with students in younger years and help them and of course, Parents are invited along too. This most recent "All Change Day" was about different countries, with each student asked to attend wearing something that represented their heritage.

This was Dan Jon. 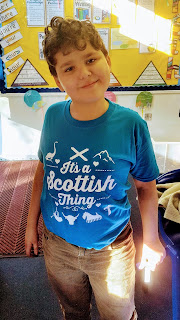 I love that he is so proud of his Scottish roots! I really need to take him back to Scotland and show him all the things he loves about the place that he doesn't even really remember.

Red house was to learn about France during the day and for the first session, we used Pastels to draw our interpretations of Monet's Water Lilies and Japanese Bridge. Below are mine and Dan Jon's. 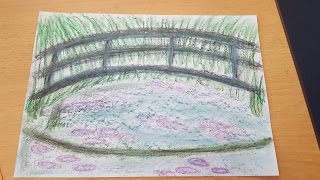 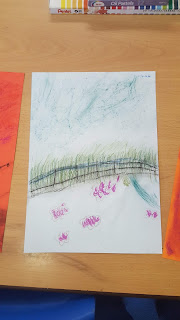 As I am so well known by all the staff and students, (I mean I've been at the School as a parent for eleven years now and a Governor for six and I've been on too many School Trips without either of my children in attendance to even start counting!) it was a great time, with the students showing me their work, catching me up on their own news and Dan Jon and I had a rather lovely chat with one of the girls in his year who was asking all manner of questions about Diabetes that she hadn't wanted to ask in a more public manner before.

We then went on to create the Eiffel Tower at Sunset (again our attempts are below!) and I happen to know that a certain 39 and 3/4 year old may have her work on display because she may have accidentally heard a certain teacher saying how she had found a piece of work she had wanted to add to the display, until she realised who it had belonged to thanks to a name and age written on the back and then decided that she was going to put it up anyway! 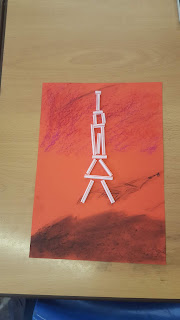 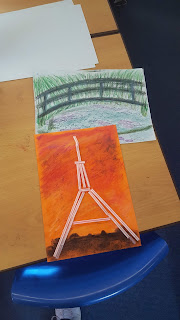 The children then went to break, and many of the parents left, but I was staying for the second session so hung out talking with a few teachers and some of the admin staff.

Our second session was about inclusivity, about how even though we all come from different backgrounds, have different heritages or likes or tastes or eye colours or skin tones, together we are strong. Together is where we belong and so began our third art project for the day, we were to draw our hands, and draw on our hands the things that we love, things that make us, well us! 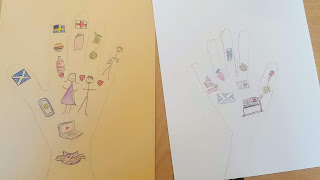 Our last session of the day was after lunch and we learnt a little French History, we went over the colours and words for different foods (the children on my table were all annoyed that I could remember the French for Apple, but not for Pear, but as I said it was over twenty-five years ago that I took French!) and watched some French cartoons too.

The whole day was fab. Dan Jon and I loved getting to hang out together and learning together and being creative together. I just need to persuade the Head that there is time to do one more all change day before Dan Jon leaves this Summer... maybe we could even do it on a day that Top Ender has an inset day and Flyfou rhas a day off work!
Craft Family Life learning School