- February 01, 2019
Just before Christmas, Dan Jon came in from School and commented that his knuckles were a bit sore. He took off his gloves and showed me, what looked like a little burn or graze. I questioned if he had caught his hand on the radiator in the bathroom, or at School, but he assured me he hadn't. So, a little magic cream later (Yes, it was a pot of hand cream I'd written magic on!) and it was sort of forgotten. Well, forgotten by me at least.

A week ago, Dan Jon called to me as it was his bedtime and he was crying with pain. His hands were sore, and from the look in his eyes, this was proper pain, not trying to get out of going to bed pain. I suggested he go and give his hands a good wash in warm water (just in case it was something on his hands!) and that he meet me in my bedroom afterwards. 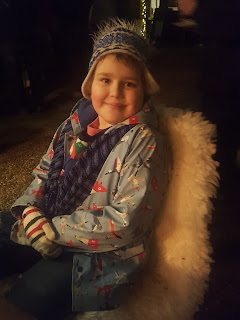 When he returned back upstairs to my room, Flyfour and I examined his hands. The only cream I had that I could think would do any good was some Sudocrem (that stuff works miracles I swear), which I gently rubbed into his now bright red and slightly swollen hands. He soon went off to bed and Flyfour and I agreed that a Dr's appointment the next morning was the way to go.

At the Doctors, we met with a Nurse who took one look at Dan Jon's hands and diagnosed Chilblains. She was fab and asked Dan Jon if he knew what Frostbite was, he said he did and explained what it was and she explained that he had something like that... just not as bad!

What can you do about it?

Well, not a lot. Dan Jon already wears gloves (and is now wearing them during outdoor PE too), and we're making sure that he doesn't warm up too quickly when he comes back into the house or School.

It was suggested that he use something like an Aveeno hand cream a few times a day and we've told him this will help, but really it's just making his hands super soft and supple! Actually, saying that we have noticed that the massaging helps warm his hands a bit more steadily and it's really lovely being able to spend a few minutes with him after School helping him work the cream into his hands and having a chat.

Hopefully, Dan Jon will never get them again, but as a Type 1 Diabetic with a mother who always has cold hands, I have a feeling this might be the first winter of many where he has to deal with the pain of Chilblains.
Diabetes Family Life Health