We had a Fajita Salad on the Saturday night, that Flyfour and I really enjoyed but the children found a little spicy and it probably didn't help that I picked a few Salad leaves that had some bite to them... Still, it was fine and they all ate it if just a little slowly! 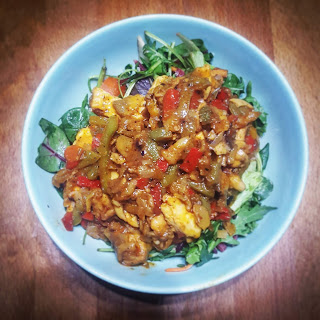 Sunday we had a fabulous Indian Chicken with Cucumber and Red Onion Salad. This will make it to the regular rotation of meals really quickly because it was seriously so lovely. We'll just have to make it with a lot more meat as we all wanted more after we had finished. 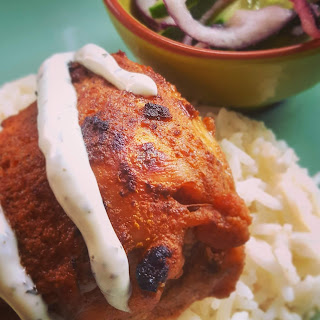 Monday was our Buddha Bowl and I really loved it, as did Flyfour but Top Ender and Dan Jon didn't like the Chickpeas (despite Top Ender loving Hummus) and so didn't really enjoy the bowl.  Flyfour and I, however, will have that again just maybe we'll do something other than Chickpeas for the children. Although we did have a variation for lunch a couple of days later, my bowl may have had Chickpeas but the Children's didn't! 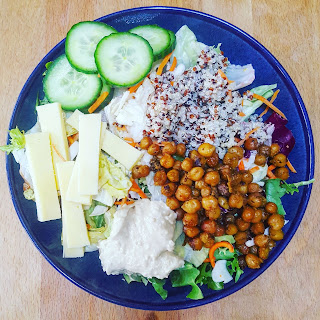 Tuesday we had a Prawn Chicory Salad, which was disappointing and led to the first and only rebellion of the month led mainly be me, meaning on Wednesday we didn't have a Mushroom and Carrot Salad with a Sweet Soy Dressing. Instead, we had a take away from Burger King!

Thursday we had a Chicken Stir Fry, which as we all know by now is always a winner. 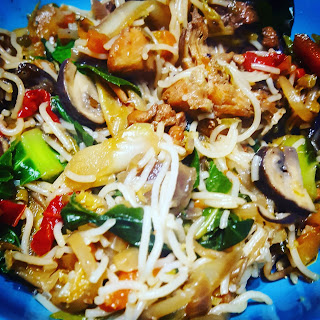 There are just six more salads to report back on, as our month of salads is almost over. I wonder if this week we'll find our must-have salad, or if it is the Panzanella that is the one real winner, or rather those Homemade Croutons that do the trick!
Food Health Main Meal