An Unexpected Holiday In A Day

- February 27, 2019
Flyfour had arranged a last-minute day off whilst the children were on half term and so we thought we would go for a walk as a family and just enjoy the sunshine that was making February feel Spring-like, rather than a cold winter day like it was just a week before!

Flyfour had an idea of a walk that he had wanted to do that he had driven past several times when he had been working in Chalfont and so we set off to central Buckinghamshire... actually we headed to Chequers (yes, the country house of the Prime Minister) as the walk we were going on was just up the road from the Chequers estate. In fact, the area used to be part of the Chequers estate!

When we arrived at Coombe Hill, we found the carpark to be quite, erm well there were a lot of Potholes, which is to be expected from a natural area like this. I wish I'd got a photo, but just make sure to go slowly and you and your car will be fine. 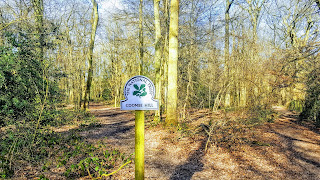 We followed the shortest walk around Coombe Hill, also called "The Best of Coombe Hill walk" and is just 1 mile long, which Dan Jon had randomly picked out of a choice of the three walks at the National Trust site. We could have followed the Coombe Hill Trees, Shrubs and Grass walk, which was 1.6 miles or the Coombe Hill and Chequers Trail walk, which was a bit more challenging and between 5 and 7 miles, but we figured the children would never forgive us! Flyfour and I are planning to go back on a nice day so we can walk it together, maybe with some nice walking boots for the pair of us.

The walk is easy, with the route having paths and no steep inclines making it easy for pushchairs or wheelchairs (we saw a lady pushing a wheelchair) or children who'd rather not be walking to see a great view! Despite the area being busy with lots of other families walking around, it was peaceful and as we sat to eat our Picnic lunch, we were afforded a great view over the Aylesbury Vale, with Flyfour and I picking out landmarks we could see, and me getting very excited that I could see a Garden Centre I had once visited! 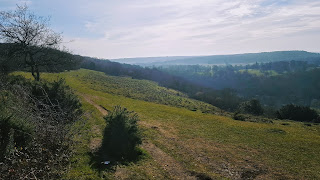 Of course, you can also see, Chequers and they can see you too, with huge cameras mounted around the estate. Again, I didn't take a picture because, well I don't need the Government taking more notice of me and following me around again!

After we had finished our walk, we headed to Buckmoorend Farm Shop, which is just down the hill and stockist of not only Gluten Free Foods, but also items made or farmed in the local area. Actually, the meat that is sold in the Farm Shop actually grazes on the Chequers estate. Dan Jon didn't want to walk around the shop (it's very small, Tops, Flyfour and I made the place look crowded!) so he read, with Chequers as his backdrop. I mean, that's kinda cool, right? 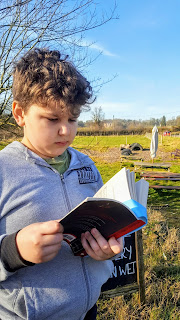 We did buy a few items in the Farm shop, a pack of very chocolatey Brownies, which Top Ender, Dan Jon and I split between us, whilst Flyfour had a GF Flapjack. Again, we would have taken pictures but the food was in our mouths before we thought about it and if we went back to buy another package or two, we may well have eaten those before we took pictures too!

There was one last place that Flyfour wanted to visit, somewhere he'd driven past at least two hundred million times (okay, so estimating isn't my strong point) and to him it was just called "The Cheese Shop", but in actual fact is called No2 Pound Street. 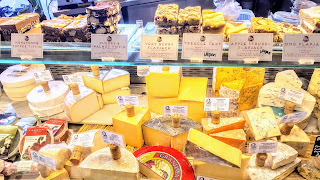 It does, of course, sell cheese but surprisingly it also sells GLUTEN FREE TREATS, which Flyfour was rather excited about (yes despite having already had a Flapjack and having purchased two cakes from the Farm Shop) because being able to purchase quality gluten-free treats, that aren't mass produced and that aren't the same old flavours is exciting!

It wasn't until we were driving home that Flyfour actually remembered the real last place he wanted to visit. When Flyfour had been driving to Chalfont all fifty million billion times, he had passed Tring Reservoir and yet, because of the raised sides had never seen the actual reservoir... so we stopped for a walk, which is where I found myself having a small fall and spraining my wrist! 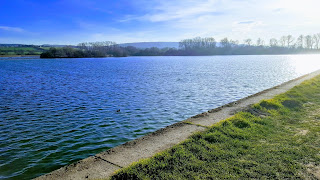 The whole day was a great family day.

It was fun from start to finish, Flyfour didn't get sunburnt (despite the children and I teasing him about it ALL day), nobody suffered too bad an injury (I'm glossing over my wrist!) and we all enjoyed each others company. Now, we can't wait for our next Holiday in a day!
Family Life Free Days Out