The Food and Craft Fair

- February 19, 2019
Saturday morning had us all up bright and early, despite it being the first day of the half-term holiday and everyone apart from me had stayed up rather later either reading or watching the Welsh Open. I had been doing both but had also gone to bed at a "decent" time because I'm a sensible grown-up.

Flyfour and I had announced to the Children, the previous evening, that we would all be leaving the house at 9:30 am the next morning and we did actually get out the door on time. It was only once we were all buckled into our seats, that we remembered we hadn't said our family morning prayer and so we said that before we set off. 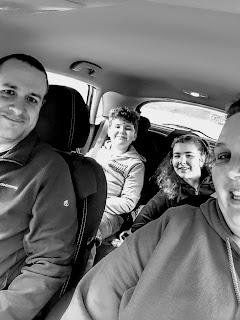 The plan was, that we were going to go to the local Shopping Centre to have a look at the Food and Craft Fair, (here until February 25th!) or more particularly, the Food part. Flyfour and I will often eat Cheese and crackers for our evening meal on a Sunday evening (or as my lunch during the week) and we like to support artisan companies because generally, they have the best cheese!

The problem was, when we got there the stalls weren't open, as it wasn't opening until 10 am! So we went for a quickish walk around the shopping centre and even managed to get Flyfour to offer to buy us all books (we declined, as we had all been gifted books in the week!).


We had great fun looking at the few stalls that were there, sampling different cheeses and having a good conversation with one of the vendors, who gave us some good recommendations of his own wares and soon had £10 in exchange for five different pieces of cheese, that Flyfour and I decided we'd like based upon the samples we had tasted. 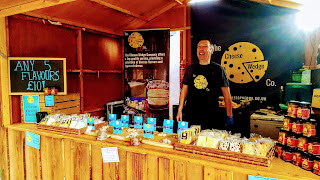 I asked if the Vendor minded me taking a photo of his stall/wares and he went to hide in the corner and we joked that he didn't want to be in the picture whereupon he started posing for me and joked that he didn't get out much. I think I cracked a joke about me not being allowed out for much the same reason which is why he started laughing when I snapped the above photo!

We found a stall selling Cannoli which the children happily agreed to share, by splitting the eight different fillings in half, and even managed to get Flyfour to buy them a lunch of a baked Ham Calzone (Dan Jon) and a Bolognese Arancini (Tops) which they both devoured when we had lunch later that day. 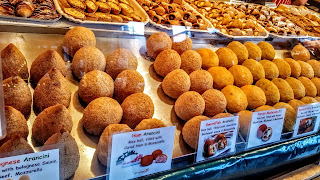 We also found a local company, who run team bonding events, but they also do family days and there are opportunities for children aged between 10 and 16 to have a go too. It has a spy theme, so as we were the first to actually speak to the guys, we had a go at disarming a bomb following some clues that were left out for us. 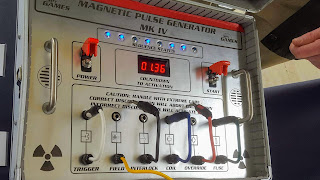 I feel a little bad, as they were making out that it was super hard and that on previous attempts to do it at other fairs that people hadn't been that successful and the four of us had it worked out within about thirty seconds, but we played around pretending we were unsure as it made it more fun and we still "won" in plenty of time. 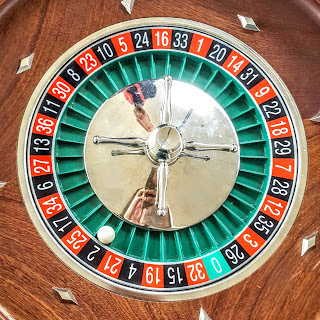 I had Black 22 in my head, and look where it landed! So close and yet so far.

As we left, we were in one of those picture perfect happy family moments, we'd had fun together, we'd purchased food together and we had plans for the future together. We should go to Food and Craft Fairs more often!
Family Life Free Days Out