Top Ender's Hour To Do Anything!

- February 26, 2019
Whilst Dan Jon was at his Babysitting Faith In God activity last week, Top Ender and I had a whole hour to ourselves, and Top Ender was quite sure what she wanted to do with that hour. Now remember, within reason she could do anything, and what did this teenager of mine decide to do?


There had been suggestions of going to the Library, or looking in a couple of shops that she likes, but no. Top Ender was determined that if we were going to hang out together that there was just one thing that we should do, and that was to go to Costa for a drink and possibly a sandwich, or a cake or a sandwich and a cake! Luckily, the home of Brother and Sister Island is about five minutes away from a Costa, and so after dropping Dan Jon off, we quickly sped off, found a parking space and was sitting drinking our drinks and Top Ender eating a pack of Mango pieces, all within ten minutes. 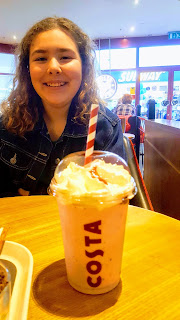 It's people watching with a difference. 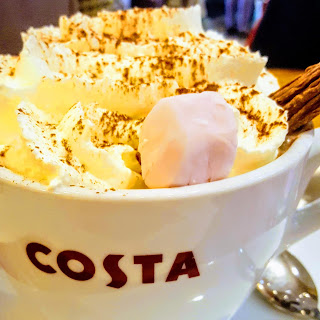 After we had finished our drinks, we spent time looking over the books in a Supermarket (where Top Ender complained the entire time because the teen section wasn't up to her particular standards!) before picking Dan Jon back up.

It was a great hour, and certainly gave Tops and I, a spring in our step!
Family Life Free Days Out Paid Day Out