- February 16, 2019
By Saturday morning, I had mostly calmed down from my bad mood over the family ruining my salad plans. I realised that I was taking the whole not liking the salad thing personally. It's a salad, it isn't something to get annoyed over. I'm used to the family not liking food I do, that's why I get to have whatever I want for lunch when they aren't here! And the Coronation Chicken Salad? That will be something I have for lunch in the future, although, with a star-shaped fried egg on top it was rather lush for breakfast!

By evening time, the family (well Flyfour was at work, so he doesn't count) were contrite and understood that I was making food for them, that was healthy, nutritious and pushing the boundaries of what they were used to for a reason. I was doing it to help them, not to punish them. They agreed after the MASSIVE lunch they had both had (Tops had a Five Guys, and Dan Jon had been to Pizza Hut for a friends Birthday) that a small bowl of salad would fill them up, and I wouldn't get annoyed at the waste if they didn't eat it.

So we had the Roasted Pepper Panzanella. 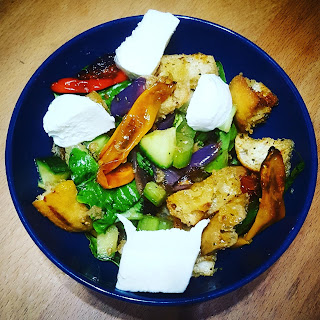 OH MY GOSH, this is now my favourite Salad. The Home Made Croutons were AMAZING and both the children asked if there was enough for them to have another portion. Which there wasn't because I had eaten it ALL.

The Caprese Salad went down so well with Flyfour, that he even took pictures and Dan Jon and Tops were upset because they didn't have any, having had some salad at the Munch and mingle and being too full when they got home, but they did like the idea and have asked to have it soon! 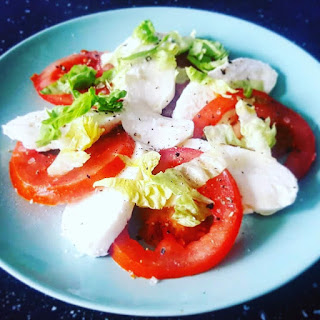 The Caesar Chicken Salad was a winner, but again mostly because of the home-made croutons. I even made gluten free ones for Flyfour! Honestly, after having found out how easy Croutons are to make, I'm just going to make them every week and add them to everything. 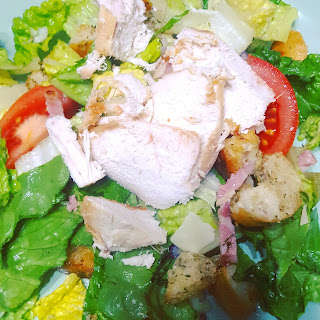 The rest of the week just seemed a little the same and to be honest, wasn't all that great! The Stir-fry was a success, as I used up a lot of veg that was hiding in the fridge, and just finely chopped it to add to the stir-fry, with Honey, Chinese Five Spice and a gluten-free Soy sauce. Even Top Ender ate it, but then that could be because I didn't add any Courgette or Mushrooms.

Hopefully, this next week will be better, will give us some more great salads to add to our meal rotation and if nothing else we have learnt that I can make a great Stir-fry, that the way I cook Salmon is nothing short of amazing (or it could just be that Aldi sells great Salamon) and that we weren't as loyal to our Supermarket as we thought we were!
Family Life Food