A Family Day Out to Drayton Manor and Thomas Land

- November 09, 2010
One of the things on our Family Fun list of things that we want to do with Top Ender and Baby Boy was to go to Thomas Land, which is in the grounds of Drayton Manor. Baby Boy has seen adverts on the TV and picked up leaflets from shops and Hotels and was just desperate to go and see Thomas and his friends. Even Top Ender was quite interested in going to Thomas Land, although not strictly a Thomas fan. 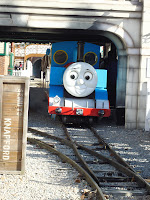 When we were invited up to Drayton Manor for the end of season firework display on press passes and I was really excited as I hadn't been to Drayton Manor since I was about ten and it was a great opportunity to go to Thomas Land at the same time! Daddy has never been to Drayton Manor and so he didn't quite know what to expect, and my odd memories about the place didn't really help. The mentioning of Huggies and log flumes and non stick pants and tractors were really something I should of kept to myself. Maybe I shall share that story over on my Facebook page however... I am sure that my cousins would love to hear that story again!

When we got there, Baby Boy got excited as there was a Grinning Thomas over the road and even Top Ender could spare a grin or three as we could see some of the more extreme rides looping all over the place. She wouldn't even consider going on them, but she does like to look at them and listen to the people screaming! As we rounded the corner into the Car park we could see a group of men putting out what looked like a HUGE fireworks display for later in the evening. It all added to the general excitement of the day and it hadn't even started yet!


We came into the Park at the Thomas Land Entrance and knew that despite it being really busy that is where we would have to start. We went in and checked Baby Boy's height against the measurements so we could see what he could and couldn't go on and bumped into the lovely Rosie Scribble and IJ! Thomas Land was everything that we expected and with a trip on the real Thomas, Baby Boy was really chuffed (did you see what I did there?!) about the day.

After we had been round Thomas Land and through the Zoo we were able to then visit the rest of the park, which was great fun and we were able to go on some of the more "Grown up" rides and even went and saw Happy Feet in 4D. The 4D film was great fun, and Baby Boy and Top Ender loved that it was a condensed version of the film that they know and love. After we came out of the cinema I managed to get Top Ender to go on a "scary ride" whilst Baby Boy and Daddy went and looked in the gift shop. Being a typical man however he didn't look to see the prices of anything other than the sweets and chocolates and they were expensive.

There were only two negatives to the whole day. The first was the amount of people smoking in the park, it was bad enough that they were smoking in open areas but when they were smoking in the queues for rides it was a little too much. I stayed away from the confrontational side of me and just made sure that I kept myself in between the smokers and Top Ender and Baby Boy. Daddy even tweeted Drayton Manor to make sure they knew that he wasn't happy!

The second negative was when having queued for fifteen minutes to go on the Pirate Adventure ride we were told by word of mouth from the people at the front of the queue that they had closed the ride. It was like some sort of horrid Chinese Whispers and not something that some of the people in the queue took well. Luckily Top Ender and Baby Boy were good sports about it and understood that Daddy and I had no control over this happening. I would suggest to Drayton Manor that next time they put someone on the door to stop people from entering when they want to close, not just turn a queue of paying customers away. 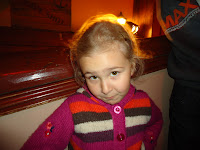 Top Ender, Baby Boy and I went on the Jolly Buccaneer whilst Daddy queued to get us some chips to eat before the Laser and Fireworks display. It was by far the best ride that we had been on all day as not only was it fast and seemed to go on for ages, but it was the thrill of going on a ride in the dark. After we had been on the ride, we joined Daddy in the queue and in true PippaD fashion, we got chatting to the families behind and in front of us as we queued and they both said that they had had a great day just like we had!

The Firework display at the end of the day was amazing, and to hear that there were going to be two new rides next season (one in Thomas Land and one in the main theme park) was really exciting and did make both Top Ender and I wonder if when the new hotel opens we could stay so we could go on the new rides... I am guessing that we will have to wait and see how much that will cost though!

Daddy and I were quite excited about the Thomas Land Christmas season, where it Snows three times a day and we both decided that we want to go back as a Christmas treat... Which as of yesterday we are! If your interested in booking tickets for the bound to be fantastic Christmas events (including a 4D Christmas film!) then book now, as I am guessing that tickets will sell out quickly!