- November 05, 2010
Earlier this year Daddy decided that there wasn't anything to lose and that the bad habits that we had got ourselves into with regards to bed time routines for Baby Boy and Top Ender had to be gotten rid of and new good routines had to be followed. This involved a lot of crying from Baby Boy as I had slipped into nursing him to sleep.

It was so hard for me because for half the week, Daddy wasn't here as he worked in the evenings. I tweeted updates on the progress, mentioning how long Baby Boy had cried for, or how long he had shouted on me. The next morning however, it was all made better as we put a star on his chart for him having been a good boy and having gone to bed on his own (ha!). And quite quickly we found a routine that worked for us. 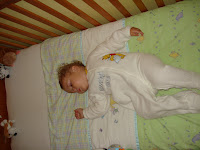 When the clocks went back last Sunday I was kicking myself, our routine has slipped a little and although Baby Boy was in a great routine of going to bed around 7pm (and then sleeping in until 7am) with the clocks going back I knew that he was going to sleep until 6am for the next few months and that now would be the perfect time to tweak our routine again; Before there was nothing I could do about it!

I have had several thoughts of what could do (including making Daddy get up with him instead of me!) but when a Press release from the company Worlds Apart came into my email I know I had found the answer that would work for us. The website www.readyforbedweek.com provides information and tips and even a handy reward chart to download!

For every hundred people that download the reward chart from the site Worlds Apart pledge to fund a Bed Kit for children through Sleeping Children Around The World which is a charity you can find out more about at the link.

The lovely team sent Baby Boy a Toy Story Go Glow Pal to review. Baby Boy has been eyeing this up ever since he saw Toy Story 3 and so when it came in the post Baby Boy was thrilled. The part pillow part teddy also functions as a night light when you squeeze the Aliens hand and Baby Boy took him to bed with him, last night. Thanks to the magic that is the webcam in Baby Boy's bedroom we got this image as he fell asleep... 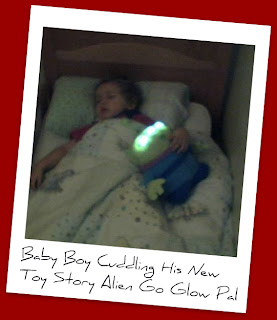 The light stays on for 15 minutes, or can be turned off by squeezing the Aliens claw hand and can be purchased from several retailers with an RRP of £19.99!


It is the 3rd Annual week of Worlds Apart Ready For Bed week. It made me realise that adjusting your bedtime routine every so often isn't a bad thing. As Children grow and the needs change of course the routine of the evening should change. It made me quite proud that Top Ender is really quite good when it comes to bed time (cursed myself now haven't I!) 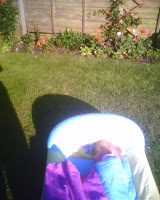 As a sort of reward for having been so good I updated Top Enders Disney Princess Go Glow Rechargeable Night Light and Torch to the High School Musical Go Glow Light which even has stickers so you can customise your light/projector how you want. 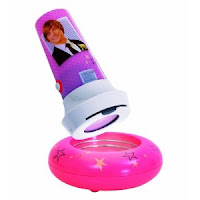 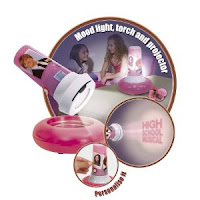 Top Ender was thrilled with the torch/projector, but we don't have a functioning webcam in her room at the moment so I couldn't get a photo of what was going on. The light again has an RRP of £19.99 and seeing as the last one lasted well over three years I think it is a bargain of a price!

I guess overall what I am trying to say is that everyone has a different way of doing a bedtime routine and as long as you realise that you aren't the only parent who has considered driving the baby in the car until it fell asleep and that we all need to tweak our bedtime routines every so often I think that our children will be fine!
Family Life