Jabra Cruiser 2 - A Review by Daddy

- November 25, 2010
In recent months, changes at work have left me on the road a lot - regularly driving between TV studios, satellite uplink base-stations and outside broadcast events - so when Mummy was invited by the nice people at Wildfire PR and Marketing to review the Jabra Cruiser 2 Bluetooth in-car speakerphone, I realised I had the perfect opportunities to review it for her.

Because, until I started my current job a few years ago, I had never met people who relied so much on their mobile phones. For me, a mobile was something I carried to make emergency calls.

Nowadays I am a big smartphone fan - I've had them all from Windows Mobile, to Android, to Apple iOS. But whilst I still treat them more as mini-computers than phones, it doesn't detract from the fact that the people who I work with insist on using their private mobiles more than the landlines paid for by the company!

Truth be told, initially I was a little hesitant to be the reviewer here - Mummy thought it was a bluetooth headset until it arrived. I have never been a fan of the "Star Trek" look, always finding amusement in people with glowing blue ear-rings talking to themselves in Supermarkets...

...but this is different - this device is for your car (somewhere I am spending a fair amount of time these days), and is designed to clip to your sun visor, where - paired with your phone via Bluetooth - makes your phone hands-free. Well, almost hands-free - when a call comes in you still have to push one button on the device to answer the call. I don't think that's illegal - I mean it's no more distracting than pressing buttons on the radio, or adjusting the air-con right?

The unit, which is very lightweight indeed, is very simple to operate. I was a little taken aback turning it on for the first time when it starting yelling instructions at me on how to pair it with my phone (in my case, an iPhone 3GS). I wasn't ready for that, but fortunately the instruction leaflet supplied showed me how to pair it later, presumably instructions for people who were not paying enough attention earlier.

Once paired, it proceeded to download the contents of my address book - so that it can read out the name of the incoming caller. I presume that this is relatively secure, as I guess it knows via some unique ID the device with which it is paired? I would hate for it to be stolen from the car and give someone access to my phone's address book. This can be disabled on my phone, but only after the pairing. I am not sure how I would now wipe it from the Jabra Cruiser 2.

There's very little to say about the device in operation - basically it just works! When my phone rings, the Jabra Cruiser 2 announces the incoming caller's name over the top of my own ringtone. I push the answer button, and talk away. The two microphones allow for some clever noise-cancellation which means its easy to hold a conversation without feedback or pausing to let the other person talk. The built in speaker has adjustable volume, which at the maximum is very loud when I'm stationary, but a little quiet when on the move.

The claimed battery life is 14 hours. So far, I have yet to run the battery down, although I am hopeful to do so soon - mainly because the device is meant to tell you, in its amusing mechanical female voice, when you need to put it on charge - this I want to hear!

One downside is the short charging cable - at least, short by my car's cavernous interior standards - to charge the device whilst clipped to the visor means a cable that stretches across the front of the windscreen, trying not to wrap itself round the steering wheel. Two alternatives - charge it in the house (it's just micro-USB, so charges off a USB port on the PC or I found charges nicely off an iPhone charger that takes USB cables) or locate it on the visor on the passenger side (problem - can't reach that safely to answer a call!). But with those 14 hours between charges, someone on the road two hours a day is only going to have to charge it weekly, and a full charge takes about 2 hours. When not used, it will store a charge for just short of two weeks. 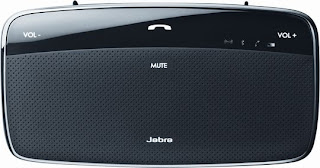 A feature that fell short of my expectations is the device's other function - acting as a bluetooth to FM transmitter. In simple terms, this allows me to hear calls, or music, from my phone via the bluetooth connection to the Jabra Cruiser 2, which then outputs it on an FM frequency to be tuned by my car radio - effectively replacing the built-in speaker with your car speakers. I don't have a separate FM transmitter for my phone yet, so I was keen to give this a try - but it was a bit of a let down on two fronts. The first was it's choice of frequency, which seemed to constantly clash with real stations on our ever-crowded FM bandwidth in the UK. Yes, you can press the volume buttons to change tuning frequency (which it reads out to you), but then you have to match that on your car stereo - and it's only any good until you drive on a bit and it clashes with another station. The device outputs an RDS name of "CRUISER2" but whilst I was hoping my car radio could track the frequency if I changed it, that didn't seem to be the case. Secondly, the quality of the FM transmission varied - it was occasionally somewhat hissy, so at the moment using this is not going to be a replacement for my CD's!

At this stage, I honestly don't know how much use I am going to get from this device. Like my sat-nav, I don't like to leave items of value in the car so, also like the sat-nav, I won't realise I need it until after I've forgotten to take it with me. For me, it's a lot of hassle when you set off on a journey, especially a short one, to fix this to the car, turn it on, turn the Bluetooth on my phone and make sure they are paired. And that's assuming I remember to take it with me. And remember to charge it.

But, as a device that serves the main purpose it was designed for (not the FM function which I think was an add-on needing more thought), there is little I can do to fault it. If you're looking for a neater alternative to in-ear bluetooth headsets, and you spend a lot of time in the car, you can't really go wrong with the Jabra Cruiser 2. It has the gloss and finish of a far more expensive device, and the voice call clarity was second to none - enough to impress work colleagues with expensive hard wired devices that involved little microphones and wires run all over the front of their cars. This is small enough to stuff in the glove box or door pocket, although the lack of a carrying case or pouch suggests it is designed to be left clipped in the car.

Furthermore, a quick Googling reveals there are some great deals to be had on this across the web, so anything that keeps more hands on the steering wheel (almost all the time!) and has such high call quality definitely gets the thumbs-up from me.

The Jabra Cruiser 2 is available to buy from Apple Stores.
Review Technology