- November 18, 2010
My Mum made a big deal about Halloween for my Sister and I and all the children that she looked after (she was a childminder) when I was little. Then seven years ago Daddy and I started a little tradition where we have had a little fancy dress Halloween Party for Family in the evening. Last year due to all of us here having just had Swine Flu we were unable to go to our own party!

Instead we opened the door to trick or treaters and had a good laugh at home. We still missed our party though. This year we decided that we should have a Halloween Party in the run up to Halloween for just the Children at least and so early on the Friday morning before Halloween we made our way to my Aunties house for our party. This year there was a difference though. This year along with pizza and fancy dress costumes we had a Toyologist box to open. My Family knows about my blogging and about what we have been doing as part of the Toyologist programme, but Auntie (my sister) hasn't seen it first hand yet...

As I didn't want to give toys that would spoil Christmas gifts, my Sister and I had discussed what there was in the box and who should get what. Big Cousin got a Baby Chou Chou Learn to walk doll and a Fur Real Snuggimal, which she was very pleased about. Little Cousin got a Tomy Aquadoodle Animal Magic Sounds mat and a Tomy Mr Colour Maker which she had to fight her Daddy off in order to play with and Smallest Cousin got a Playskool Push N Stack Gears, which was brightly coloured enough to raise a smile! Whilst each available adult started unpacking the toys, and trying to get a go on their favourite one we started talking about toys and what we liked in a toy. 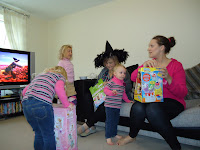 Auntie likes traditional board games, and ones that are fun for not only children but adults to play too. At the moment her children are a little young to play most board games, but she can't wait until they are old enough to enjoy a game of something like Bobbin' Bumblebee!

Granny is fond of toys that were around when Auntie and I were little, like the Sylvanian Families that Auntie used to collect. Uncle is like me and likes ones that grown ups can play with too... not that we were found playing on the Tomy Aquadoodle Animal Magic Sounds mat when all the children were eating in the Kitchen. No, honestly it wasn't me it was Uncle and Auntie, I was busy eating pizza in the kitchen with the children to be drawing rude things on a mat! 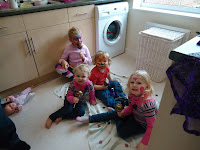 So what did we make of the toys? Well the Tomy Aquadoodle Animal Magic Sounds mat was loved by everyone. All the adults and children had a go, but I was a little disappointed that there was only one little pen in the box. I guess I am just spoilt with the abundance of pens that we have at home for the mats that we have!

The Tomy Mr Colour Maker was loved by the adults more than the children. Especially when one of the children managed to make Mr Colour speak Spanish instead of English. It was a bit like that Friends episode where they all watch a Spanish Soap Opera! It was however loved later when there was nobody else around and it was a bit quieter. 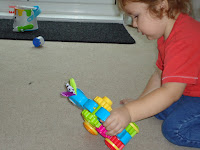 The Playskool Push N Stack Gears was great fun and Baby Cousin is using them as teething rings and even Baby Boy loved playing with it. What Baby Cousin really liked though was the Fur Real Snuggimal which she is often found cuddling!

The Baby Chou Chou Learn to walk doll was very popular, with everyone wanting a go. Auntie has reported that Baby Chou Chou is more often being used as a doll in a pram instead of as a walking doll, but that she is still much loved! 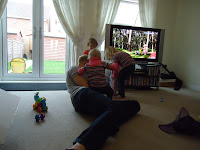 Everyone had a chance to have their face painted with some of the face paints that we had already had from an earlier Toyologist package and I think that it was Uncle that was the real star of the day with a fantastic skill that appears to have been untapped so far... at least we know now that if we need anything creative done that we know the man who might be able to help us! 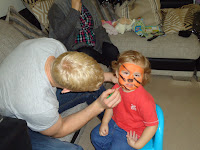 The toys were a great addition to the Halloween party, and it was great spending time with our family and just playing. Everyone was really happy and thankful to Toys R Us but I guess the real success of the party was the mess that was left at the end of the day... 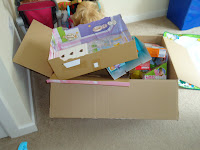