- November 08, 2010
Many years ago Daddy and I went to the Technology Home show. I had always quite liked the idea of a smart house (like Bill Gates has), but at the show I quickly got the idea that we did would have to be at a fraction of the cost. Luckily when I get ideas, Daddy is able to implement most of them (as he has the technical genius that I lack) and this is one of the reasons as to how and why we have a projector and screen in our living room.

The projector was an expensive purchase, and one that we knew would make a dent in our budget so we would have to make sure that we used it lots to bring the cost per use right down! So far we have done well, we have had family movie nights using the projector, (Baby Boy has never got over seeing Tom and Jerry cartoons quite so large) we have watched TV (honestly you have to watch TV on a 84" screen, its an experience you won't forget in a hurry), we are planning a cinema party for Top Ender's Birthday and today we played video games...

We already know that Top Ender has skills when it comes to driving games, as is often relayed in the story of Princess Top Ender and Baron Teenager Boy and Baby Boy seems to be following in her footsteps clocking up a fair amount of time sitting on Daddy's knee and playing driving games on the PC and sitting with me playing Mario Kart on the Wii. Today though Daddy connected the PC to the projector and both Top Ender and Baby Boy played the PC Driving game Formula 1 2010. 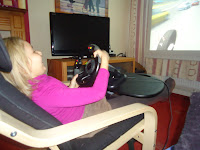 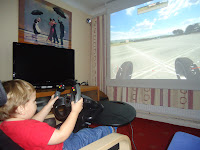 Daddy had intended to have a go himself, but with Top Ender and Baby Boy hogging the game, he had to wait until they were in bed. Even I got in on the act with a sneaky go!

I am a firm believer that computer games are not mind rotting and that they are good for the development of children (like Scientists have been saying since 2004) when played occasionally (playing computer games all night and day is not good for anyone) and can help develop good life skills such as problem solving, strategic thinking and even spatial awareness! Anyway.

A bit of fun on a giant scale!
Family Life