- November 07, 2010
I was tagged by Alethea over at Mom on a Wire in a Twitter Meme absolutely ages ago. I decided to wait until today however as I knew that something was coming up that would make a good connection to this Meme and all will become clear in a few moments! 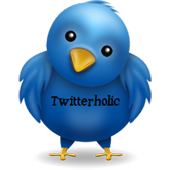 When did you join Twitter (You can find the exact date at bwitterday.com)

My Twitter Birthday is Today! That's right, I have been on Twitter for two whole years and boy do I send a lot of Tweets.

I joined Twitter because Flylady was on it and I kept hearing so much about it from other techies that I thought I would have to join in or I would get left behind. Sure enough I didn't get left behind!

Who is/was your oldest follower? Who did you follow first? Tell me all about them. (firstfivefollowers.com will give you this info)

My oldest follower who I actually know who they are is Nikki Starr, I followed her because she was following FlyLady too. She is a seriously lovely lady and although she doesn't keep her blog up to date I still love her!

Do you have any celebrities following you or have you ever had a DM from a celeb?

Well I am followed by Keith Chegwin (He is a celeb!) and he followed me after a rather daft tweet that I replied back to, that I assume he found funny. Either that or he fancies me or he remembers when we met when I was about eight.

Yes I did keep the Twitter email telling me that he was following me, because I knew one day I would find a use for it. I also had a little chat (as in one tweet) with Ortis Deley (him who is on The Gadget show these days) after I couldn't remember Lucie Cave's name, but I knew he would remember... and he did.

Ooh erm. I think that it would have to be my Grandad. Seriously, I don't think there would be anyone other than him who I would love to follow as he would of loved Twitter!

My Blog, but I think that it was only once I was tweeting and blogging that anybody other than a few very nice people knew I existed.

So who to tag?! I think I shall tag whoever wants it, as I think most people have already done this... Just let me know if you have taken it!

In summary, the rules are: Grab the badge, mention the person who tagged you. Answer the questions. Select some more fab bloggers who tweet to continue the meme and then sit back and relax!
Meme