A Magic Moment or are they are out to get me?

- November 16, 2010
Yesterday Top Ender, Daddy and Baby Boy were playing a game where they were spelling words cheerleader style. It's a game that Top Ender quite often plays to test us on how to spell certain words, not realising that it's actually improving her own spelling skills.

Baby Boy was sitting on the sofa watching Top Ender who starting a new cheer.

My two and a half year old son can spell cat.

I am so proud. 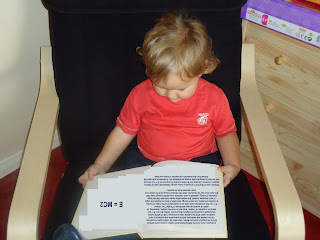 So who else influences Baby Boy? Was it the TV? Was it Dora the Explorer? Did Dora teach my son to spell cat?

I bet it was Dora.

I mean I know she has taught him some Spanish which is why Baby Boy goes around demanding that we "¡Abre!" anything that isn't already open. But when did she start teaching him to spell words? Has Bear from the Big Blue House told Dora where I live? Is Dora sneaking into Baby Boy's room and teaching him to spell?

1) Her best friend is a Monkey. A talking Monkey who wears red wellies and no clothes. His Dad wears a full suit, so is Boots walking round naked? I don't understand. It almost confuses me as much as when Donald Duck gets out of a bath and puts a towel around his waist, yet only ever wears a T-Shirt in everyday life.

2) Look at the size of her head. It's huge. There is no way that she is growing into that head. And its not like big heads run in her family. Her parents and cousins and younger twin siblings all have normal sized heads...

3) Where does she live?! She lives in a English and Spanish speaking area near a Jungle, Ocean, Polar Region, Fairytale Land, Mesozoic era, and near to a Big Red Chicken and singing chocolate tree.

4) She never gets angry. Who other than me doesn't get angry ever? Exactly. Dora is on drugs. She must be to be that relaxed.

5) She breaks the fourth wall, but doesn't listen. The other day she asked me what my favourite part of the episode was and I told her that it was when I imagined that she and Isa got in a Cat-fight over who Boots liked the most (Isa has a crush on Boots you know that right?) and she said that was her favourite part too. She so didn't listen to me.

So there are just a few reasons why I am worried about Dora, even if she did teach Baby Boy to spell cat. Surely I'm not the only one that doesn't trust Dora though? Do you trust Dora or is there another cartoon character you don't trust? 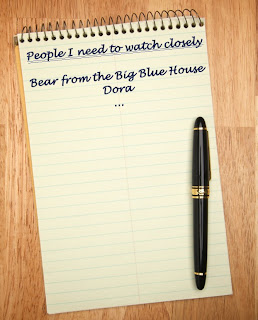