- November 22, 2010
Many Moons ago when Top Ender was really a Top Ender at Nursery and Baby Boy was just a twinkle in Daddy's eye, I was a Go To Work Mum. The last job that I had was at a company in Central Milton Keynes where I worked in a small team of five. Four girls and our boss (the one I accidentally asked to have his babies) DC.

As I am sure you know, working with someone day in and day out means that you form friendships a lot quicker than you would expect in any other environment. I also had the additional benefit of having had something in common with each of the team members (taste in ties, list making, dietary issues and shoes) and so we all had the sort of work friendships which even when I left to have Baby Boy meant that we kept in touch via email, the odd text message and me occasionally popping back into the office. 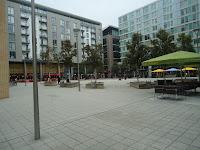 It was decided that we should meet up for lunch and so one Friday Lunchtime earlier this month found me nervously waiting for the girls (DC wasn't invited, although I am sure that he wanted to be!) thinking back about when we had properly seen each other last. Within a few minutes it was rather like old times, with catching up and explaining what had been going on and what had been missed out on.

We ordered our food, I took sneaky photos of the girls sitting around the table and it felt just like old times. 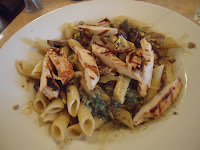 I loved it and hated it.

I loved it as it was so lovely to be able to talk to a Grown up without having to tell them what the list of symptoms were, or ask if they could put the bins out. I loved it because it was natural, there was a rhythm to us as a team that not even time could diminish.

I hated it because for a brief moment I wanted that life back.

I managed to get myself invited back to the office so I could go and say hello to a few old friends and see how the place had changed. It was odd, everything was different and yet the same. So many staff members were there still, knew who I was still, remembered old jokes, and long ago made promises of keeping in touch.


When I got home I realised though that as lovely as it was seeing everyone, as much as I had needed to say Hello and to catch up that I couldn't go back to working out of the home all day. Who knows though? Maybe one day I will be a Go to Work Mum again. Until then I quite like being a Lady that lunches and us Girls are going to meet up to go out for Lunch in December... we're even letting DC tag along this time too.
Family Life