- April 20, 2011
We received two tickets to see a press screening. I took my husband as he is useful for things like buying popcorn..

Many years ago when I was just a lad girl, my Mum would let me watch films with her. One film that I remember watching one night was Arthur with Dudley Moore and I remembered that I loved it. I am pretty sure that I didn't fully understand it, but as I grew up and watched it time and time again more and more of the story got through to me. When I heard that they were doing a remake of the film starring Russell Brand I was excited, if anyone was ever born to play a part then Russell Brand was born to play Arthur Bach. Luckily I was one of the first people to see it in the UK when I was invited down to a press screening of the film and so I didn't have to wait until it's release date of the 22nd April 2011! 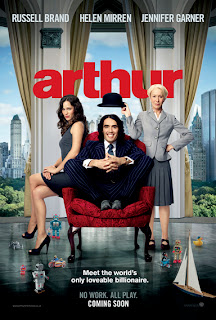 Just in case you don't know the story line, (Daddy for example has never seen the original Arthur despite having seen Arthur 2), Arthur is about a high functioning alcoholic who could possibly be one of the most charming men you have ever met and he is also the only heir to a multi-billion fortune. Whilst he wastes away his money on gadgets (come of them are really cool), prostitutes and of course alcohol he brings a lot of embarrassment to his family and the family business and when his latest antic causes some fallout for the family business it is decided by his Mother (Geraldine James) that he needs to marry Susan (Jennifer Garner) who could keep the family business strong... only problem is that he goes and falls in love with someone else.


Helen Mirren plays Hobson (Arthur's nanny) who only ever has Arthur's best interests at heart, and helps to make Arthur the man he was always destined to be with the help of his true love Naomi (Greta Gerwig). There are great performances from Luis Guzman (as the driver Bitterman) and Nick Nolte (as Bert) and the rest of the cast for that matter and it makes this film not only a great re-imaging of the original film but also a great romantic comedy that stands well on it's own.

I cried and laughed through the film, as did Daddy, and will be going to see it again with my Mum when it is on general release. The trailer below shows a lot of funny moments, but trust me there are a lot, lot more in the film!

(Video can be found at http://youtu.be/IJpSdJJh278)


And just one quote from the film because I couldn't resist making Daddy laugh when he reads this later...