The Cresta Run at The Snow Centre, Hemel Hempstead

- April 24, 2011
We were given an hour on the Cresta Run at The Snow Centre, free hire of outerwear, a pair of gloves, fed and watered and the children took home a goody bag!

On a blissfully hot day that could have been mistaken for the height of summer I was searching for my thermal gloves. I had already found hats, gloves and scarves belonging to Top Ender, Baby Boy and Daddy and knew that my gloves were going to be in the same drawer, I just had to find them. What was I needing with these winter clothing accessories on such a hot day? We were going to The Snow Centre in Hemel Hempstead for some time on their 100m long Cresta Run on inflatable rubber rings... you know the normal thing to do on a sunny day.

When we arrived we were a little nervous but we were soon kitted out with water proof jackets and trousers, snow boots and helmets and as you can see the family looked quite cute all dressed up for an afternoon on the snow. 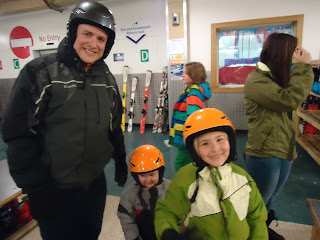 Top Ender had been worried about this trip, as she wasn't sure if she would enjoy speeding down a snow covered slope on an inflatable ring but she was excited enough to be the first one out of the changing area and in to the snow. We were each handed an inflatable ring and as Daddy, Baby Boy and I made our way up the edge of the slope we watched a figure start hurtling towards us on the slope. We suddenly realised that Top Ender was missing from our group and that it was actually her on the slope! Top Ender loved it, and for the rest of the time we were out spent her time racing to the bottom before climbing back up to do it all over again. We took some video of ourselves and this is all of us at one point or another going down the slope.

(Video can be seen at http://youtu.be/DhT0o1gHgBs)


We all had a blast, it was a great work out, as walking back up the slope dragging a Ringo behind you counts as a good cardio workout in my book. Top Ender and Baby Boy slept rather soundly that night and I think even Daddy and I had a deeper sleep than normal!

It was only afterwards when we were upstairs in one of the conference rooms having something to eat and drink (I think we drank all that was there for a party of ten and there was only the four of us!) that Daddy and I realised just how taken Top Ender and Baby Boy had been with the slope as they spent a large amount of time looking out the window that faced on to the slope. 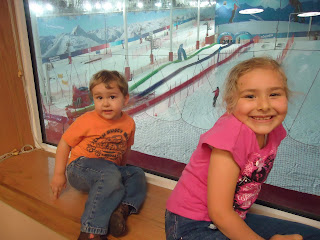 We would all love to attend again, and will hopefully be able to go in a couple of months or so (I have to save up my pocket money!) just as long as nobody tells my children, I don't think I could stand two months of

"Are we going to go to The Snow Centre today?".

If you wear your own outdoor clothing it will only cost £35 for a family of four to have 30 minutes on the Ringo's, and although this is about the same amount you would spend on a trip to the cinema with snacks the time at The Snow Centre is definitely more fun!!

We were very lucky that we were also filmed by a professionally chappy who has made a video of our time on the slope which looks much better than our shaky photography!


We would like to thank everyone for their time on the day from The Snow Centre and for the PR Company for having invited us to come along and it was also great to meet Angels and Urchins too!
Paid Day Out Review Winter