Avenue Q The Musical - A Review

Many years ago I worked for an ISP (Internet Service Provider) and thought it highly amusing when I heard a song from a musical that explained that the internet isn't for online shopping, sending cute e-cards or checking your stocks and shares but that it is actually for p0rn. The song became my ringtone and only caused one embarrassing incident when I left it in my locked desk and I left the office for a short time... Anyway. I discovered more and more about this show, a sort of Sesame Street for Grown ups and really wanted to go and see it. When it closed in the West End last October I thought I had missed my chance until I found out that it was on tour and when my local theatre offered me tickets I knew that my purpose in life was found.

If you don't know about Avenue Q, then imagine a stage show for adults about adult problems, you know like coming out to your friends, not having any money, spending all your time watching p0rn, wishing you weren't single... you know everyday young single adult problems! Oh and with puppets. Yes puppets. To start with I was watching both the actor and the puppet, but soon forgot all about it and just watched the puppets who display emotion and human traits exactly the same as their human counterparts. 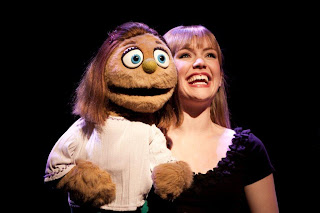 The show was hilarious from the start, with local references/jokes thrown in and a rather energetic Puppet sex scene, that had the audience roaring with laughter. Running at about 2hours and ten minutes (including the interval) this show is for those over 12 years of age, although if it was my 12 year old it would make for a rather awkward discussion on the way home! It's hard to pick a favourite character from the show, for years Trekkie has been my favourite because of the tune that first introduced me to the show, but I will admit that the Japanese character Christmas Eve (played by Jacqueline Tate) really played her part well! 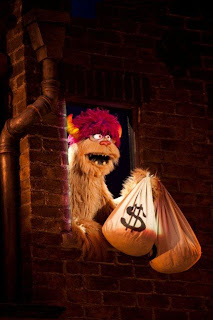 I whole heartedly recommend this show to anyone who enjoys a laugh or twenty and doesn't mind laughing at Racism and enjoys Schadenfreude! Avenue Q will be at Milton Keynes Theatre until the 23rd April 2011 (so book tickets now) and moving on to Nottingham, Brighton and Cambridge but doesn't stop touring until early July.
Review Theatre