- April 21, 2011
We received some cooking ingredients to make these cakes, but it was plain chocolate. Yuck.

I thought that Club Penguin had passed Top Ender and Baby Boy by. I mean sure we saw the little plush toys in supermarkets, and we saw adverts on TV and on the internet but neither of them had ever asked for us to type in the URL... we just knew what it was and accepted it as being cute. Then we were asked if we would like to make some Club Penguin Easter Nests and I was intrigued enough to say Yes! The postman knocked on the door and brought a huge parcel and when we unloaded it we found this inside; 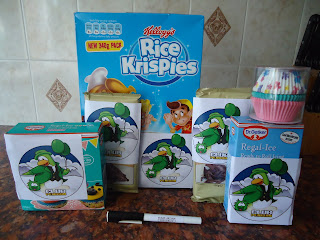 Reading through the instructions I was excited, as we were going to make nest cakes, but instead of adding eggs to the top we were going to add Puffles! So Baby Boy, Top Ender and I washed our hands, put on our apron's and started making cakes. Which took ages, but because of the magic of the internet you can watch in about a minute and a bit.


(Video can be seen at http://youtu.be/bUEdR-eyaiM)


What do you think? How cute are they? Here is a better close up for you of the individual cakes; 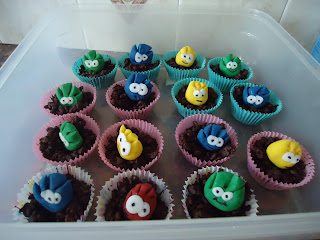 They are dead simple to make because all you have to do is make a nest out of chocolate coated cereal and make sure you leave a small dent in the top for your Puffle to sit in! The Puffle's are just spheres of coloured icing which are then snipped (with scissors) on the top three or four times to make the hair. 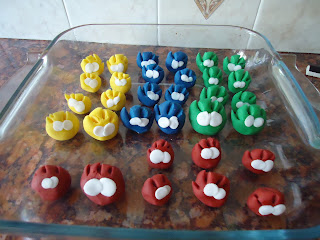 The eyes are just little flattened spheres of white icing which are attached by dabbing a little water on to where you want the eyes to sit. They look a bit scary without pupils or mouths but still cute in a Zombie sort of way. We also made a huge nest, which will be our centre piece for our table this Easter weekend (if it lasts that long!) and I think it looks quite good! 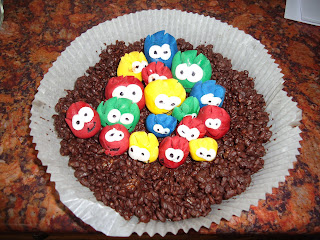 Why not make some yourself this weekend with your family? It's a great time spent together, it's a fun twist on traditional nest cakes and they were really easy to make!
Cakes Recipe