A Missed Night At Spamalot

- June 17, 2015
For months I've been excited about going to see Spamalot at Milton Keynes Theatre. There have been billboards about it in the Shopping Centre and every time I've walked past one I've squealed a bit and jumped up and down a bit, which is a bit embarrassing for an apparently middle aged woman to do, according to my husband at least. So, when School called just after lunch on the day I was supposed to go to the Theatre to see the show to let me know that Big Boy was poorly and I needed to go collect him I knew that I had no hope of going to the Theatre that night. 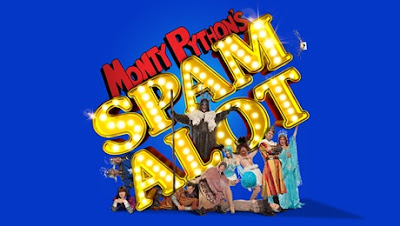 There is one thing I know about Spamalot, apart from how fantastic it is, and that is as an adaptation of Monty Python and the Holy Grail not everyone will enjoy it. I know, some people actively dislike Monty Python.

I prefer not to socialise with these people.

There were a couple of people that came to mind however. People that I knew would love Monty Python comedy. A couple of Top Ender's favourite teachers. It pained one of them to turn down my offer of the tickets, but the other? The one I really liked because he banned the swear words "Justin Bieber" and "One Direction" from his classroom? Well, he was really up for attending the theatre in my place... and I don't think the offer of a glass of wine had anything to do with it!

So, he went to the Theatre to watch the show and the next day let me know what he thought of it, his review follows and I have tried really hard not to be jealous.


Described as '(lovingly) ripped off from the classic Monty Python and the Holy Grail', this musical had a lot to live up to for me, a massive fan of the original film. Thankfully, it ticks all the boxes. Spamalot is terrifically funny, wonderfully camp and has just the right amount of utterly ridiculous.

A thoroughly entertaining marriage of nostalgia-laden Python sketches, tongue-in-cheek songs and hilarious dance routines had the audience smiling the whole way through the two hour performance. The multi-talented cast switched seamlessly between characters and costumes, impressing with both their singing voices and hammed-up dance moves.

The performers, especially Earnshaw as the Lady of the Lake - whose pitch and range was flabbergasting - ended up making Pasquale (King Arthur)'s singing voice sound decidedly average. However, Pasquale made up for this with a wonderfully silly performance and impeccable comedic timing, especially in partnership with Tracani as his faithful manservant Patsy. I didn't realise it at the time of viewing, but Tracani is actually Pasquale's son, which may explain the fantastic chemistry that the pair shared on stage. In fact, for me, Tracani stole the show and was by far my favourite character. His timing and facial expressions were utterly hilarious. Patsy could easily - were it physically possible -  be the illegitimate love-child of Baldrick - from Blackadder - and Lee Evans.

Pasquale also had the audience and fellow cast members in stitches with his hilarious and bemusing ad-libbed rant about Mel B, a beaver and a caramel egg. Only for his fellow cast members to have their revenge later on in a scene involving the Knights who formerly said 'Ni', who now recite lines from '2 become 1' by the Spice Girls.

All your favourite scenes from 'Holy Grail' were there, including the Knights who say 'Ni', the killer rabbit, the Black Knight, the Frenchmen who 'fart in your general direction' and of course the eternal debate of whether a swallow (European or African) could indeed carry a coconut from its native tropical climbs to the temperate forests of Arthur's Britain.

All of this was held together by a technically brilliant performance by the ensemble, the unsung heroes of the production. I couldn't quite believe that all the music for the show was created by that small group of very talented individuals.

All in all, a thoroughly enjoyable production which would be popular with anyone from the most die-hard Python fan to someone who had never even heard of Idle, Cleese, Palin, Gilliam and Chapman. The thing I loved is that at no point does the musical come close to taking itself seriously which was a great reminder to always look on the bright side of life... 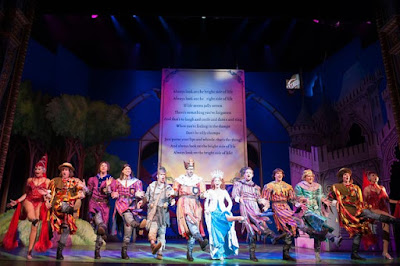 So as you can see he had had a blast and I can't be jealous any more, as I think he may have enjoyed the show even more than I would have and who knows, maybe I'll make it one night whilst the show is still at Milton Keynes. And if not then, maybe I'll just watch the film again and remind Top Ender's teacher that I like to drink Dr Pepper and Top Ender would really appreciate not having a ball thrown at her head next PE Lesson...

We were given two tickets and as I didn't want to cancel at the last minute I gave them to a friend and he didn't throw the ball at Top Ender, he just saw it happen and hopefully fell about laughing like I did when she told me about the incident!
Family Life Review Theatre