- June 18, 2015
At Church, I get to be with the Children after the main Sacrament meeting (the bit with the bread and water and sermon) as someone somewhere thinks I'm sensible and a good influence on children... Anyway. The Primary Presidency (which I'm a part of) for our Ward (local congregation) thought that it would be fun to have a Primary Talent Show, for the children to show us and each other their talents. We arranged it to be on a Saturday afternoon and the Children started practicing their talents, ready to perform.

All the Children were fantastic, we had a child reading rhymes, some told jokes, a few danced, some sang and there were other acts but as I'm only related to two of the children and therefore permission to plaster their pictures all over the internet I only have pictures of my two performing!

Big Boy and Top Ender decided to play their Violins as their Talent. I know I've spoken about this several times over on Facebook and Twitter, but honestly Top Ender has greatly improved in the last year, to the point where I thought it was a tape playing a few months back! Anyway, Top Ender and Big Boy decided to play the pieces they played at their recent Summer Concert. 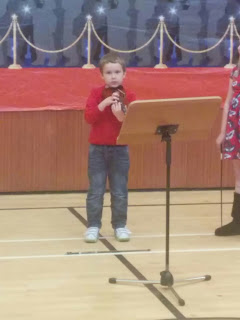 Whilst Big Boy played, Top Ender looked on and I could see the pride in her face over her brothers performance. BB's performance was met with rapturous applause, mainly because everyone loves BB and also because he performed really well. 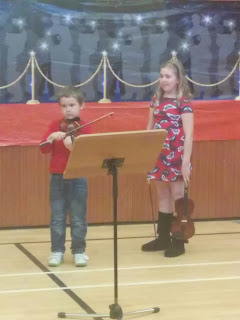 The plan had originally been for Big Boy and Top Ender to play a piece together, but Big Boy was feeling a little insecure and so Top Ender decided it would be better to skip the piece they were going to play together and move straight into her performance.

As we've come to expect from Top Ender under the pressure of a live performance she played beautifully and again the end of her performance was met with enthusiastic applause. 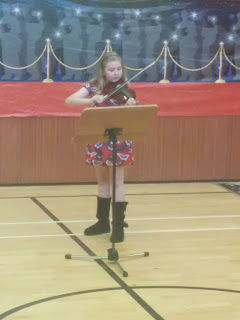 They might not be Britain's Got Talent standards, but they enjoyed sharing their talents. Supporting their fellow Primary members as they performed and I think the thing I was most proud about, was watching Big Boy as each act got up to perform.

Big Boy had moved from where he had originally been sitting and found an empty seat at the front and every time a new act came on to stage, he gave them a brilliant grin and a thumbs up. Then if at any point they looked over to him during their performance he repeated the gesture, and again as the applause died down at the end of their act. BB has such a big heart and I'm so lucky to get to call him my son.
Family Life Music Religion