- June 30, 2015
A few months back, I was asked if I would like to review the Kinivo BTX270 Wireless Bluetooth Portable Speaker. I said yes, mainly because the one thing I am missing from my Primary arsenal (at Church) is a good quality speaker that can link up to my phone and allow me to play music if the music leader isn't around and also because I want to be the annoying Mum who has a portable speaker on her picnic blanket this Summer. 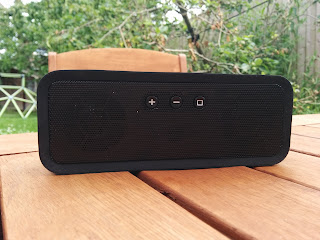 When it arrived, it was perfectly timed. It was the day of the Primary Talent show and so I thought I'd take it with me, just in case. It was actually needed, needed that is until a friend came with a bigger portable speaker that was louder and when we're backing up children in a sports hall, louder is what we need! Since the BTX270 arrived, I haven't been able to make use of the speaker in Primary, as our lovely Primary Music Leader has been with us each week, so I can't say how good it is in the Primary setting.

The children and I have started using the speaker to play music when we're eating dinner each night in the garden. It's been fun, creating Youtube playlists together of various songs we like (or don't like!) and singing together whilst we eat our meals and spend time together.

The speaker itself is designed to work with smartphones, tablets and PC's and if there isn't a bluetooth function on the smartphone, tablet or PC, there is a 3.5mm input (cable comes in the box, although I used my own as it's longer!) to connect the two together. 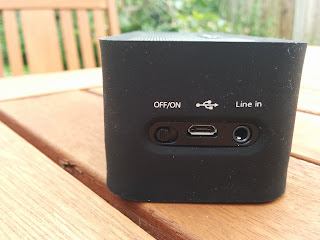 The BTX270 also uses a rechargeable battery and with my useage it's lasted a little over ten hours, before I've felt the need to recharge it and saw the little light. I figured that it would be better to recharge it before it died on me mid song! I've used the micro USB cable to charge it a few times, it takes a couple of hours, but I do it whilst I'm on the PC doing something else, but it would have been nice if it came with a charger. At least that way I wouldn't have to have the PC on, or hunt my phone charger out to make use of that. 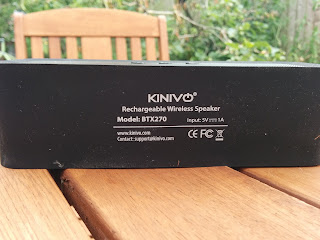 As you can see from the pictures, the speaker is about the size of a ruler, and quite thick. It is cased in rubber, which I guess is more for protection as it is portable rather than being some fashion statement. Saying that however, the speaker, in my humble opinion, looks good and doesn't look cheap.

Something I didn't realise until I received a call is that there is a hidden microphone in the speaker, I think it's under the control buttons (Volume Up, Volume down and a third one I have no idea what it does really!) and this meant I could have a conversation with my husband without having to disconnect my phone from the speaker. 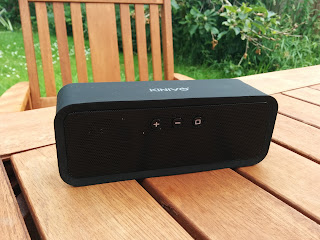 The Kinivo BTX270 is a great speaker, it's brilliant for what I need and for it's size is surprisingly loud.

I was provided with the Speaker in order to produce this review.
Music Review