- June 12, 2015
It was a "All Change" House Colours Day at School this last week. Basically, it's where all the children in the School seperate into one of four Houses and spend time together, no matter what year they are in, taking part in a fun activity. The theme for the afternoon was all about stories and writing, after all the best writers are readers. BB is in Red House so had gone in wearing red. Everything apart from his trainers was red. Red pants, red socks, red shorts, red t-shirt, red jumper, red hat. 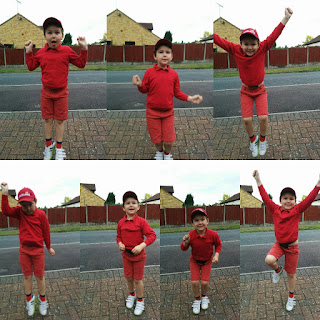 Normally he doesn't go quite so... overboard but this last House Colours Day was special. Last week the funds that the children raised by going into School wearing non uniform will be donated to Diabetes UK and all because of him.

At the School BB goes to, he's the only Diabetic child.

Anyone got any glue to stick my Heart back together?

I knew something "special" had been planned for the assembly that afternoon before the Children were separated into House colours and took part in the various activities, as BB's teacher had cleared her plan with me a few days previous. Her plan was to have Big Boy stand up in front of all the children and get him to explain what actually living with Diabetes is like.

Now, you won't believe me if I tell you this, but it is true. Big Boy is actually really shy. Anything where he has to stand up in front of people, or talk to people that he doesn't know leads him to clam up.

At the assembly however, he was articulate, clear, spoke loudly and in language which every child in the hall would understand.

He explained about Blood Tests, his Pump, weighing his food, Doctors Appointments, Hospital Appointments, Cannula Changes, being woken in the middle of the night to drink Ribena or eat Haribo or Toast because he'd had a low.

The only difference between them and him was he had Diabetes and wore a pump under his clothes.

He told them what it is like to be him.

From what the staff have told me, the Children listened.

One member of staff that sees BB everyday told me how proud of him she was, how he'd done so well. Another staff member emailed me that night, she only sees BB once a week for a couple of minutes but she wanted me to know how proud she was. How BB had been eloquent and she knew I would be proud too.

And I am proud.

I am so proud of my little boy.
Diabetes Family Life