I'm Finally A Grown Up

- June 16, 2015
For months now, the sofa in our living (as opposed to the one in the den) has had a hole in one side. We're not sure how it happened, and we've tried to fix it, but it didn't work and again that was fine. It was an old sofa and not to put too fine a point on it, we hadn't paid for the sofa, we inherited it from my Sister. And then Peach decided to give birth to her kittens inside the sofa and we had to cut the back in order to check on her (you have to count the placentas that are born to ensure none are left inside as that is bad) and then she discovered that the arms of the sofa are a great place to hide the kittens and we had to cut it again, just to ensure that the kittens were safe. 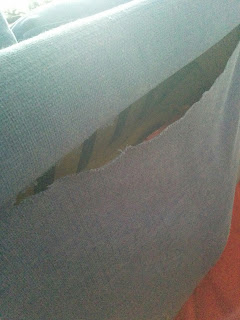 So we decided that after being married for 3 months short of 14 years, we should do something that grown ups do and buy our first sofa.

So we got the children up early on Saturday morning and planned to head to our furniture shop of choice. Ikea. Mainly because almost everything else we own in our house was purchased there and because the prices are in the range of our budget. The problem was, Ikea wasn't open for another hour, so we headed off to what we jokingly call The Furniture District, where there are four or five Sofa shops all next to each other. Daddy had found a sofa that he liked online, it was a reasonable price and we aren't the sort of people who just buy a sofa without sitting on it first!

When we got to the first Sofa Store, the sofa Daddy had found online was just inside the shop door (handy!) and so we sat on it. It was horrid. A salesman popped his head up, he was nice enough and encouraged us to look round the store and if we needed him to come find him.

So we looked at all the other Sofa's in the store and tried really, really hard not to pick the ones with drink holders, phone chargers and Bluetooth speakers built in and of course to keep our children from sitting on the spinning round ones and seeing if they could launch themselves into space.

Eventually the Salesman came and found us again. Not to escort us from the store, but to offer a friendly hand. He was nice and wasn't putting any pressure on us, he half listened to what we said we wanted, offered a few suggestions that were more than likely in his interests rather than ours (Seriously, you want me to consider that sofa? I have children, that would be destroyed in two seconds. Err, that Sofa is hideous and whilst I might not look 36 right now I most definitely do not look 76 which is how old I'd need to be to consider that sofa as I'm assuming that is at what age my eyesight will fail) and then Daddy found a sofa that he really liked.

To be fair, the sofa was nice. It was comfy, it had a high back and a high seat (both important for me and were on my list of things I wanted in a sofa) and Daddy liked it because it had an electric leg thingy bit. You know, the bit that you raise to make yourself sit back with your legs up. It was sorta perfect for our family.

It was at this point that the salesman made us an offer we couldn't refuse, that made it even more affordable and perfect for our family. Sitting in the warehouse was the very sofa we were after and actually in the colour we were after too. Another customer had purchased it, but had returned it the same day of his delivery as it didn't fit in his living room along with his wheelchair.

However we didn't accept his offer and we left the store.

There are plenty of sofas in the sea...

We went to Ikea and again we found a sofa that was perfect for us. A plain ordinary sofa. It was comfy to sit on. It was in our budget and cheap enough that if it needed replacing in the next couple of years, we could afford to do that.

We thought about it.

We thought some more.

In the end we decided to go with the first sofa we had seen, the one with the very generous discount.

And then the real fun started.

The guy talking to Daddy and I about payment ignored me completely, this wasn't the first sales guy who'd listened to us both, this was just a money guy. The guy didn't seem to care that I was paying for half of it, that I was the one who'd be accepting delivery. That I was half of this partnership buying this Sofa. All questions were directed to Daddy.

I was rather annoyed to put it simply and politely.

I muttered a few comments under my breath, but even when Daddy deferred to me over costs that hadn't been discussed or mentioned previously (Delivery Costs, which he eventually dropped to a smaller amount) the guy still directed the questions to Daddy.

I was a little more annoyed at this point.

Actually I stormed off out the store and the salesman didn't even notice I'd gone.

Still. I do have a new sofa, my first brand new sofa (well apart from the five minutes it spent at someone else's house) that's being delivered Thursday.