The End of Childhood As I Imagined It

- June 04, 2015
I remember when I found out that the idea of Santa wasn't the reality of Santa. I was five years old, I was staying at my Grandparents house with my little sister and parents for Christmas and I needed the bathroom. I went to the bathroom, which was on the opposite side of the landing that the little room my sister and I shared at my Grandparents was on and just by the top of the stairs.

When I came out of the bathroom, my beloved Grandfather was attempting to open my Christmas gifts that Santa had obviously just delivered. I was distraught.I don't remember being calmed down by my parents and Grandparents, I don't remember being tucked back up in bed, with promises that in the morning I could open my new gifts. I do remember a couple of days later, laying in bed with my new Sindy house in place (having been transported from my Grandparents back to my Parents home) thinking things over. Working out what I'd seen and what I hadn't and I realised that Santa wasn't real, my Grandparents and Parents were Santa.

It was because of this that I decided that when my children were small I was going to make sure that they believed in Santa for as long as possible, I wanted the magic to be as real as possible. 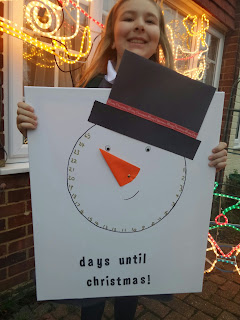 I was gutted when just this past Christmas Top Ender worked it out, and in a double or even a triple whammy also realised the truth about the Tooth Fairy, Our Elf on a Shelf buddies and a few other magic things that happen in our home. Top Ender was just a month shy of her 11th Birthday, so in a way I was quite happy, as she had had the magic for five years more than I had.

Then there is Big Boy. 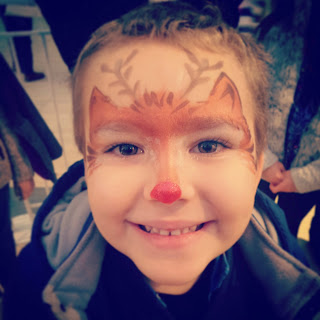 I know, we all think this about our Children, but I swear he has that sort of Velociraptor Dinosaur cleverness that would make Robert Muldoon whisper Clever Girl before being ripped to shreds.

Big Boy has been questioning about Santa since he was tiny, like really tiny. Like only just talking tiny. Which, is okay because the other great thing about BB (other than him being Velocirpator clever) is that he is also still under the illusion that EVERYTHING I say is true is true. So when BB has asked me if Santa is real I've said Yes. I'm not ready for him to stop believing just yet.

As he's got older I've asked him what he thinks when he has asked, and he's explained. He thinks Santa might not be real because there are a lot of children who don't get presents who have been good and some children don't get what they want or have asked Santa for. Oh, and the whole you have to be asleep when he comes is just a con from parents to get their children to go to bed early. The real kicker has been when BB looks at me and says that he really needs to know if Santa is real or not because when he's an adult he needs to know because otherwise his children might not get presents and all because nobody told him.

I'm a sucker for BB when he pulls *the* face.

BB asked me again this week. I'd foolishly left my Pinterest open and BB saw some pins I'd pinned for future Elf on The Shelf ideas.

Mum, is Santa real? Are the Elves real? Tell me the truth please.

So I told him the truth about the Elves.

Yes, they are dolls, I move them around at night but he had to promise to keep this magical secret with me, because not only do his cousins have an Elf and believe it, but his Daddy and Sister didn't know the truth either. I figured that letting him know about the Elves wasn't a big thing, and getting him to share the secret with me, to keep the magic was a way of preparing him for when I teach him about the magic of Christmas.

Luckily Daddy felt the same when I explained to him.

I'm not ready for BB to know the truth, that Santa is real in our hearts and in our actions, but that the chubby cheeked, bearded and jolly gentleman we see smiling out at us from adverts and drawings doesn't exist.

I know however, that this year will probably be the last Christmas that I'll be able to keep this kind of magic alive for Big Boy. Soon he too will enjoy the magic of Christmas where we make magic for others. Where we are Santa.

And if anyone wants to know, I DO believe in Santa. 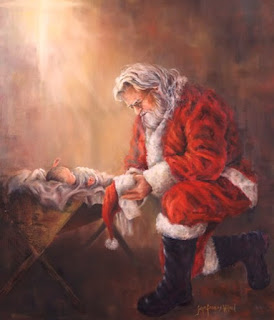