- December 06, 2017
My Mum was very excited a few weeks back and gave me an envelope that she explained was a Christmas gift that she was giving me early. If she was being perfectly honest, the gift was actually for herself, but in the disguise as being a gift for me. 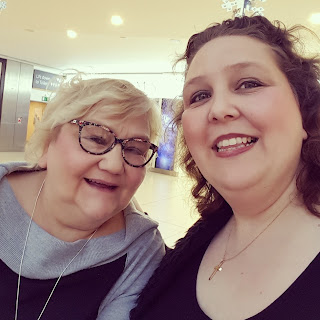 My Mum had been on Groupon and had purchased a Family Photoshoot for the children, Flyfour and I as she wanted a new family photo of us to put up in her home. Actually, she had purchased two, as she gave one of the photoshoots to my Sister too... apparently slacking on providing Family Photos is a family trait!

I arranged for our photo shoot to take place fairly late one evening and even confirmed with Flyfour that he could get home earlier that evening and put it into our diaries, before promptly forgetting all about it until the morning of the photo shoot. We decided on two different outfits, one a little relaxed and one a little more formal and we may have snuck a third outfit choice in of something even more formal and a few props of things like Cellos, Ukuleles and Xbox controllers.

Flyfour and I knew that something was up and exchanged a few glances and mentioned a need for some antibacterial gel.

We got some (hopefully) great family shots and were just moving on to the prop shots when the photographer had to disappear again.

Then a few minutes more.

When she still hadn't returned and our hour shoot was almost up, we were getting a little worried when suddenly the chap who I had booked our appointment with popped into the studio. Our photographer was unfortunately really poorly and was currently throwing up in the staff bathroom and between bouts of vomiting, crying that she just needed to finish our photo shoot and that we were really lovely.

Which we totally are!

We, of course, arranged that we would come back at another time to finish our photo shoot as not only did we not fancy a photographer throwing up all over us, but we wanted her to get better and were quite concerned about her as the sickness came on so suddenly.

Now we're just waiting for our viewing session... I'm so excited, and can't wait to get a print (or two, just don't tell Flyfour) but totally blame the photographer for me being sick last weekend!
Christmas Family Life Funny