- December 13, 2017
Milton Keynes is normally in a little weather bubble, where all the "fun" weather just splits and goes right around us. So when I heard there was supposed to be snow across Central and Eastern England, I kind of ignored the weatherman and all the doom and gloom my friends were saying about how we would be unable to get to Church or School and anywhere else that people would be wanting to go and assumed the snow would miss us.

Dan Jon was much more excited and arranged that Flyfour would wake him up at 3am when the snow was supposedly going to be falling, so he could watch it before falling back asleep. Dan Jon told me he also secretly thought that he could get up and go outside in the snow whilst everyone else in the neighbourhood was sleeping!

3am came and whilst there was a thin layer of snow, there wasn't any snow falling and so Flyfour didn't wake Dan Jon up. When I got up just after 7am, there was a lot more snow and there was snow falling, so I went in to see Dan Jon and to show him the snow. 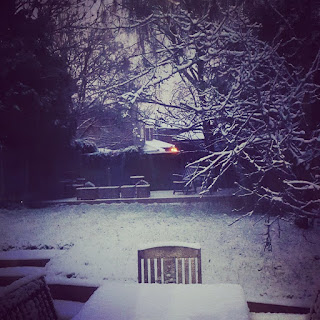 After watching the snow for a few moments, Dan Jon asked what the time was. He was worried, that I had stolen his Dads thunder a bit, by showing the falling snow to Dan Jon before the agreed middle of the night wake up call. I told him it was okay, that the time that he and his Dad had agreed had already passed, but I then said something which may be borderline genius.

I told Dan Jon, it was still very early and that he should go back to sleep until it was time to wake up.

And then I went downstairs, opened the curtains, switched on the Christmas Lights and sat and read on the sofa, watching the snow fall between reading paragraphs of my book and all the while sipping on my Hot Chocolate.