- December 04, 2017
When Dan Jon Jr started Year Five, one of the things that he was SO excited about was the Shakespeare play that they would be performing (and of course studying) as part of the Shakespeare Schools Festival. The lower school that Dan Jon attends has done this for the last couple of years (basically they started the year after Top Ender left!) and all the children love it, as do the Teachers and Parents.

Dan Jon Jr, just like Top Ender and I, has a real love of Shakespeare, I guess the daily study of the Book of Mormon and the King James Version of the Bible has helped him to have a love and understanding of ye olde English. He took the Script around with him everywhere, I swear he memorised the WHOLE thing and not because he had to, just because he wanted to. 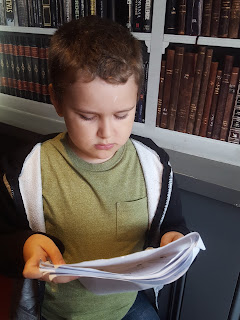 Dan Jon wasn't too disappointed that his class were performing Richard the III, instead of his favourite Shakespeare play Macbeth because he quite liked the story that Shakespeare told and like the rest of his family he quite likes a history!

Each of the three Senior classes take part in performing in one play (from a smallish selection of Shakespeare plays) and put on an abriged version of it, with the children workshopping and really getting involved with all aspect of the the production, before performing it on a stage at a local theatre.


The real trouble started when the only part he wanted was Murderer 1. Why? Because Murderer 2 is a Chicken and Murderer 1 gets the job done. He even went as far as to bribe his teacher, who had told the children she was open to bribes of wine. Dan Jon took in a packet of Wine Gums, with a note that he wasn't able to buy wine because he wasn't old enough. Still, the bribe wasn't quite enough and Dan Jon was cast as The Marquess of Dorset and a Coffin Bearer and as the Keeper of the Tower.

The day before they were due to be performing it, Dan Jon noticed I was making props for the Panto and asked if I'd mind making him a prop, and so together we made a warrant for the execution of  George Plantagenet, the First Duke of Clarence. 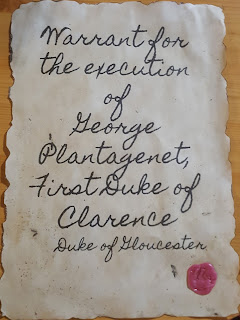 Yes, I even made a Wax Seal. I take my props seriously!

The evening performance was sold out, with parents, grandparents, siblings, cousins, aunties, uncles and School staff and Governors coming to watch the three performances. We got to watch Henry V. Much Ado About Nothing and of course the final production of the evening was Richard III.

All of the children were amazing, but of course Dan Jon was my favourite performer of the evening.

As it was a proper performance, we weren't allowed to take photographs but we did buy two of Dan Jon performing on stage that the official photographer had captured. We just couldn't get over how mature he looked.

Now, we just have to wait a year to watch him perform in the Festival again!
Family Life Religion School Theatre