The Christmas Meal Out

- December 07, 2017
Top Ender loves volunteering and helping out with the Rainbows and Brownies each Tuesday and Wednesday as a Young Leader and funny enough, the girls and the Grown-up leaders of the groups love her too. So it was no surprise, that when the time for the Christmas Meals for the three different groups came around Top Ender wanted to go to all three, but understood that she couldn't. However, with a bit of Christmas Magic, we were able to make it work and Top Ender was able to go to all three meals. And by Christmas Magic, I mean some very helpful and lovely Leaders, who I honestly love as much as Top Ender does.

This left Dan Jon and I feeling a little... deflated. I mean, I'd organised Soup with Pasta as our evening meal before I knew Top Ender was going to have a Christmas meal out. So on the night of the First Christmas meal, after driving across Milton Keynes to deposit Gummy Bear at the restaurant, we went to McDonalds.

Yes, as you've guessed it was Dan Jon who chose where we got to eat, but it didn't matter really. It just meant we didn't have to drive back across Milton Keynes to our home during rush hour (and then back to the restaurant and then back home again), we got something warm inside us and we were going to make it count as our Christmas Meal out somehow. 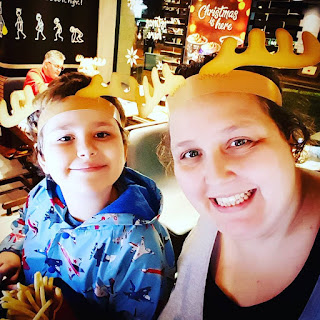 I think the Reindeer antlers made it.

We had a great laugh sitting together, talking, stealing each other's fries, singing Christmas Carols, playing games on the tablets on the table we were sitting at and just having a good giggle together. It was even better that, I could get Dan Jon Jr to check how many carbs were in his meal using the tablet rather than me having to work it out! 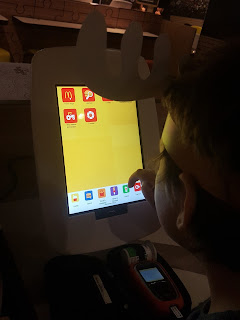 As we went back to pick up Top Ender we talked about what we were going to do on the next two nights that Top Ender was out having a Christmas meal. We may have organised some special meals and a bit of fun, but we know that nothing is going to live up to our first McDonald's Christmas meal out!
Christmas Date Night Family Life Food Paid Day Out Treat Night