- May 23, 2019
Absolutely ages ago, Flyfour had suggested a walk that he wanted us to do as a family that he had read about online. The walk would take us around the village of Nettlebed and as it wasn't too far away (just over an hours car ride) and it wasn't particularly long for a family walk (just two and a half miles) everyone agreed we'd head off on Easter Monday to tackle the walk.

Of course, Easter Monday was a beautiful day and so with plenty of sun cream applied, everyone wearing suitable hats and footwear and of course four bottles of water in a backpack along with all of Dan Jon's Diabetic bits and pieces such as fast-acting glucose, his blood test monitor and other bits we always seem to need, we set off. 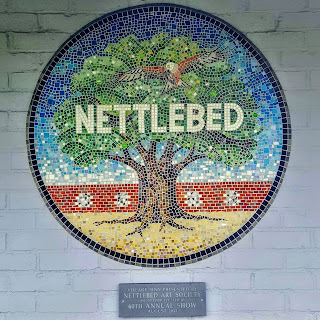 Nettlebed is one of those beautiful villages with a lot of history that you only ever see in TV programmes as the background for some Murder Mystery... actually Nettlebed was the background for an episode of Midsummer Murders but that's another story for another time. There are some great 17th-Century buildings and some great stories about the area and it was the most important brick and tile making centre in the Chilterns from the mid-14th century until 1939 with a Kiln still surviving and slap bang in the middle of some houses! 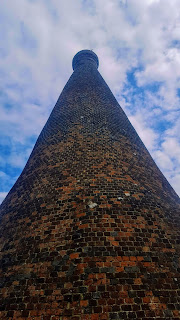 To be honest, I don't think any of us were expecting the walk to be as beautiful or as well kept as it was. We walked past allotments, where plenty of local residents wished us a good day, or a good walk and we got to pet plenty of good doggo's who were very friendly and pleased to be meeting a new person to pet them.

The walk, once it gets into the woods, requires you to follow painted arrows on trees. This was the part that Flyfour and I were sceptical about, but we'd either gone for this walk just after someone had recently gone over the arrows on the trees, or it is well maintained and we believe it to be the latter as there was a fair bit of "undergrowth" that we had to walk through at one point, where Dan Jon suddenly wished his Shorts were a bit longer as his poor legs were being attacked from what seemed all sides! 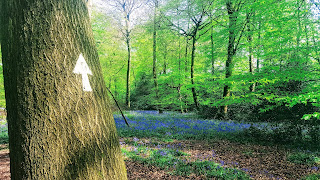 As you can see in the above photograph, there were plenty of Bluebells about, which we were not expecting to stumble upon. Dan Jon and I happily snapped what seemed like hundreds of photos of the Bluebells and sent a few to our friends who were not out and about, letting them know that they should get out to find some natural beauty themselves.

Dan Jon has this great habit of taking a photograph of himself and a pretty view on every walk we take. He then changes his lock screen on his phone, to the best selfie he has taken and his desktop image on his PC to the view so has a great selection of pictures to pick from. He is actually becoming quite talented at taking photographs and has a great eye for composition and I find myself stopping when he does because he has generally found something great to take a photograph of. 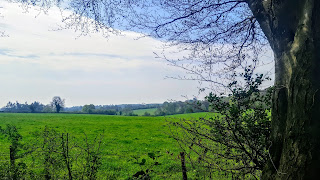 Sure enough, he found some beautiful views, the one above was stunning and we both felt we should snap a photo or two and found that Flyfour and Top Ender had stopped just ahead to take a photograph of the same view too!

This is going to be a walk that we do again, although Flyfour and I suggested that we might leave the children elsewhere when we do the longer 11, 12 or 17-mile circular walks!
Family Life Free Days Out Hobby Spring