- May 05, 2019
There is a rather smart man that I know that for notes, or correspondence or anything written uses a fountain pen. I had noticed this a while back, but it wasn't until recently that I had questioned him about it. He gave a slight grin as he spoke and I doubt he noticed, but his fingers stroked and curled protectively against one of the fountain pens he had hanging from a lanyard draped about his neck, as he explained that writing with a fountain pen forces him to slow down.

To think about what it is he is writing.

To enjoy the physical sensation and sounds of a pen scratching over a piece of paper.

He spoke about the different colours of ink you can buy these days, of feeling the weight of the pen in his hand and knowing that what he had just created may not be viewed as special by anyone else, but for him?

That act of writing was special. 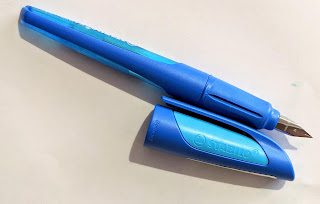 The way he spoke, the passion and the love made it feel almost religious and I made a mental note to go home and write, with my very own fountain pen that had been sent to me for National Stationery Week, a letter to a friend who has been on my mind recently, as I do most Sunday's after I get home from Church.

I almost forgot and opened my laptop, but quickly remembered that this letter was more than just a page of banal platitudes. This was a letter from the heart and I wanted my presentation to show that I had put in time and care and effort and at the end of it my ink-stained fingers would show me that I had accomplished something worthwhile.

Now I just have to hope my friend can read my handwriting! 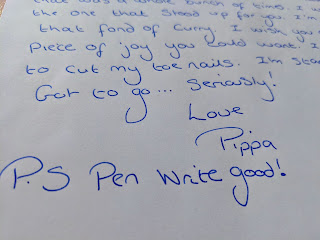 Just in case it wasn't clear, I got the pen for free.