- May 14, 2019
When Flyfour was diagnosed as having Celiac disease, we didn't really think much about it. We had lifestyle changes to make and so we made them. Who cared that Gluten-free Bread tasted like Cardboard? Who cared that it wasn't so easy to get a Take-away any more? Who cared that we would make almost everything from scratch now?

Actually, we didn't care. We got used to the bread (and then some genius improved the recipe and now we aren't just used to it, we LIKE it) and the pasta and the lack of takeaway options. We got used to making everything from scratch and came up with a few copycat recipes so that we wouldn't miss out on our favourite dishes. Flyfour even worked out how to make the perfect gluten-free batter so we could have Fish and Chips at home. 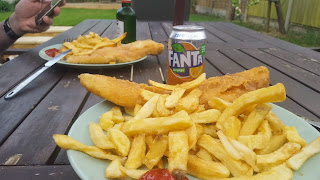 Sometimes though, sometimes what you really want is to be able to eat a meal from a takeaway and to not have to cook yourself.


And then I saw an advert for a Fish and Chip shop that had opened nearby that offered GLUTEN FREE FISH AND CHIPS (and a whole host of other Fish and Chip food items). We decided we needed to try it. So we trundled off and purchased one portion of gluten-free, and three potions of non-gluten-free (it's cheaper that way) Fish and Chips. 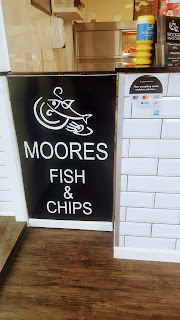 I won't lie, it was a nice meal. Some of the batter was a little soggy, but the fish was nice and the batter that wasn't soggy was really lovely and the same can be said of the non-gluten-free food too.

It was expensive, but then we're used to having to pay more for the gluten-free option and it wasn't so expensive that it wouldn't be considered again in the future.

There is just one problem. The only night this Fish and Chip Shop does gluten-free? The same night as the other two chip shops in the area that do Gluten-free. It would be really great if they could talk to each other and do Gluten-free on different nights so that everyone in Milton Keynes could get Gluten-free on more than just one night of the week!
Family Life Food Gluten Free Restaurant