- May 09, 2019
I love hanging out with the Squirrels at the School I'm a Governor at, the Early Years Class is one of the best places to be because the children are so naturally curious and full of questions, ideas and come out with the best statements. I guess, what I'm trying to say is that the class is a lot of fun and at the moment they are learning a little about animals... which means they have CHICKS in the class!

I'd been in a few days back, and the Incubator was full of 11 eggs, and the Staff were a little concerned that they weren't hatching just yet and if they hadn't hatched before the end of the week, the incubator had to be turned off... They were coming up with crazy plans of how to get around this but they need not have worried because of course, those little chicks were hatching, they were just taking their sweet time about it! 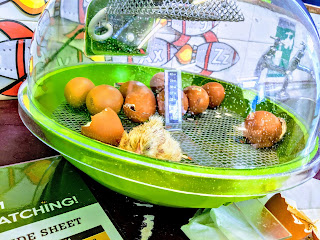 After they had hatched, they were moved to another area, where the floor was covered with soft woodchips and newspaper and where they would be able to eat and drink and poop... which is a lifestyle I know many would be envious of. 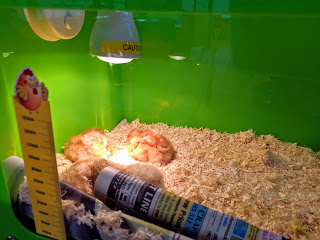 I did make Dan Jon go with me after School to go and visit the Chicks, without the Squirrels being there. This was nothing to do with the fact that Dan Jon is attacked by the Squirrels, in a loving way, when they see him and of course nothing to do with the super fan who is determined to kidnap him so she can marry him, and more to do with the fact that I wanted to hold the Chicks and figured it was easier to take a child with me to pretend it was them that wanted to hold them... 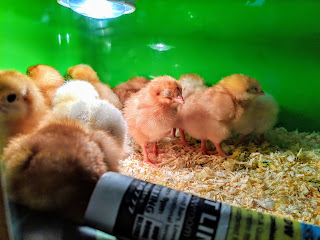 Dan Jon did hold a Chick, which then promptly pooped all over his hands and meant that I stopped wanting to hold a chick and instead contented myself with just taking pictures of them and chatting with the grown-ups whilst trying really hard not to burst out laughing thinking of Dan Jon covered in bird poop.

Luckily he has forgiven me, I know because he said he loved this morning, but I don't think I will ever get to go and hold the Chicks with him again as he leaves the school this Summer and I have less chance of convincing him that the Chicks won't poop on him again as he gets older and wiser!
Family Life Pets School