An Art Trail Walk Around ROCLA

- May 24, 2019
Easter Weekend for us involved a lot of walking, which is good seeing as the weather was amazing and as a family, we enjoy going for long walks. We had decided to go to Redland Park, a newish housing estate (built in 2013/2014) just north of Milton Keynes, outside of Newport Pagnell. Flyfour had once again heard of an Art Trail Walk (I think that makes five in Milton Keynes now) that he thought we'd like to walk, plus it was a great excuse to have a nose at some houses so we could play which house would we buy and see more of the art that we could see from the road. 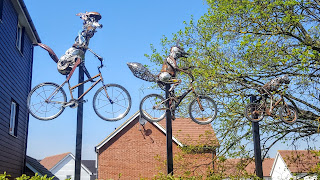 The art walk goes right through the estate, which is actually really lovely as to make it more "fun" there are various insects attached to 36 lamp posts across the estate, with a sheet you can download from the local Parish Council website to identify and record the ones you find, there is also a map of the walk and a guide letting you know a little about each of the Artists who have been involved. And, Yes I am planning on going back with the children to find all 36 bugs at a later point and if they don't want to come with me, then I'll just do it alone! 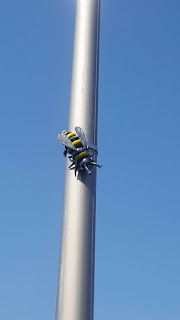 The various artists who have completed pieces that are now installed on the walk are all amazing at what they do. We recognised the style of a few of the artists, from pieces they had also made for the Gyosei Art Trail and were pleased to see that some of our favourite artists from that trail had made more art that was easily accessible for us to see. 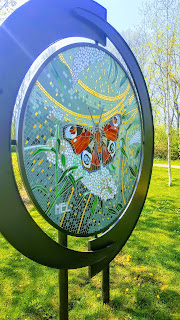 The first real clue that this is not just some art put in without thought, was the Bird Walk which during the day is lovely to see, wired sculptures, which appear to be based on local children's drawings and is bookended with two sculptures, one representing plants from each season and the other is a magical bench sculpted from an Oak tree, with little fairy houses and just making the area magical. The real magic trick to seeing the Bird Walk is to go back once it is dark, or after the sun has set. 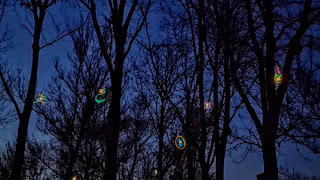 During the day the solar panels charge up the batteries in the birdboxes near each piece of art, and at night they light up! It was such a great idea and gives the whole area another aspect, and is a great reminder that art isn't just for daylight! It has also given Flyfour and I a few ideas about our own garden and how we could use light and we're hoping we might be able to share some of our projects this summer. 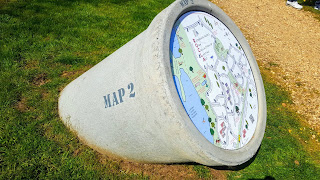 The maps for the walk, as well as being cute and designed especially for the site are so clever, being situated on the ends of concrete pipes at sensible intervals around the walk. It is so amazing how even the tiniest of details has been thought of and just makes the whole feel of the walk cohesive to the area and the history of the area.

I was a little concerned looking at the maps, as there appeared to be a giant Dragon in the middle of the housing estate. I need not have worried, however, as when we reached the area we realised it was a children's play park, but more importantly, the park has raised ground making a DRAGON! 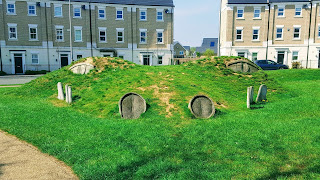 It seriously was too cool for words, although the children were a little disappointed we didn't stop for longer so they could have a go on everything there, but it was busy with local residents and we had our walk to finish! 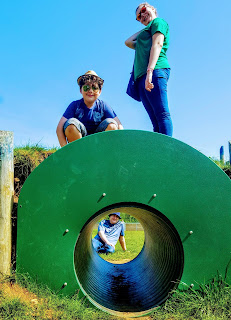 Just around the corner from the Park, was my favourite piece of Art, a beautiful Kingfisher, which against the blue sky was just so amazing and if I could I would have that in my back garden, or my front garden, or in my house or just anywhere I could look at it! 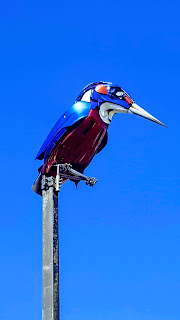 Towards the end of the route, there is a sound bench, where you can sit and listen to some great stories from locals, people who worked on the former site and I don't know if it was just sitting in the sun there, but it was really lovely and worth the time to listen to the whole piece. 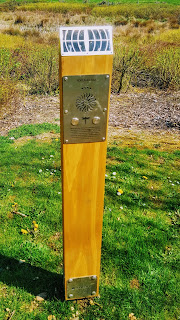 By the time we had finished walking around the art trail and the housing estate, we were convinced we needed to move... or we might just bug (Bug haha) our Parish Council to install an art trail or a Historic Walk trail near our home, seeing as there is a lot of History right on our doorstep!
Family Life Free Days Out Hobby Spring