Its a Small World after all, especially if you go by Train...

- January 09, 2010
Victoria over at Its a Small World After All is hosting a Car Sick Carnival (Part 2) and it is all about Holiday Travel. That sounds like the sort of thing that you would want to avoid reading around teatime doesn't it?

Well if it is teatime and you are reading this post you might want to stop and come back later because I am going to be talking vomit.

I was always sick in the car as a child. My parents joked that there wasn't a lay by I had left a carrier bag of sick in south of Watford Gap. This confused me as a child because we lived in Garston which is right next to Watford and I had no clue where the gap in Watford was... it was only many years later that I realised Watford Gap was an entirely different place to Watford (around 67 miles North to be exact), just don't tell anyone okay! 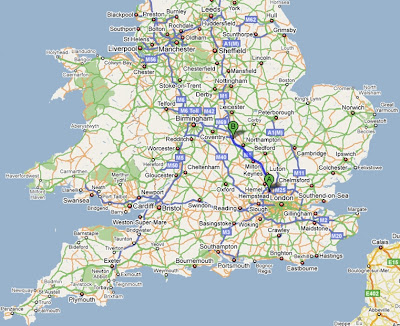 For all of those who are either not from the UK or like me and useless at knowing where things are A is Watford and B is Watford Gap. And look Milton Keynes is on there, which is where I live now!

So when Top Ender was born (Top Enders Birthday is just after Christmas) I was hoping that the be-sick-in-a-lay-by gene skipped her. Her first long journey in a car was great (we went from point A to the East Coast, see where it says Cromer? Move down a tiny bit and you have where my Nan lives) and we even managed to get to Bognor Regis (South coast) without incident! 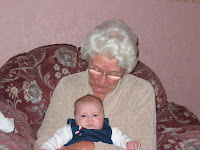 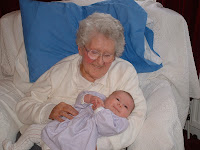 In fact my story doesn't start until a few years later. After we had discovered that Top Ender does have the gene that causes emesis just by looking at a car that has been on a long journey...
Technically it was after Christmas but don't spoil it by letting on right?
For Top Enders Second Birthday we went to Disney Land Paris. All three of us were so excited and we traveled by car to Ashford (Kent!) in daylight (helps stop people being car sick don't ya know) and stayed in a hotel before driving the short distance to the Euro tunnel the next morning. Top Ender was delighted to be on a train and spent most of the two hour journey awake. 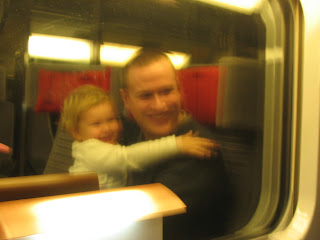 She did manage to fall asleep about a 15 minutes before we got to Disney Land Paris and was really grumpy when she woke up until she realised where she was.
Anyway cutting the long rambling story short we had a great holiday with highlights including The Genie getting a bit hands on with me on Main Street (and Robin Hood did the same in a Restaurant), Daddy being abused by Pluto and me knowing that Its a Small World was going to be important one day... 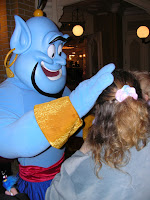 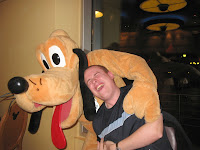 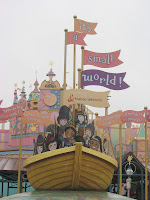 So on the last day we knew to be careful with what we ate because we didn't want to be sick on the train on the way home. All day we were great, we made sure not to eat sweets and not to drink too much and we were ready as the train pulled in to get on and to be on our way home.
And Everything was fine.
Until...
Top Ender was having a bottle of milk. She still liked to have a bottle when she went to bed and we were trying to keep the routine as much the same as possible. Top Ender cuddled up to me and had some milk whilst Daddy and I carried on talking about things that have since been forgotten (by me at least).
There were other children in the carriage, but Top Ender was the youngest. This fact isn't important until later, so remember it.
A few minutes passed between Top Ender drinking her milk and what was the most disgusting shower I have ever had. Top Ender turned to me and threw up all over me. I was covered in what ever food her stomach had partly digested and regurgitated milk.
The sound in the carriage was so quiet it was deafening. We cleaned up Top Ender, and me and the seat, and the table and a bit of the window (as a couple of parents looked on fondly remembering when they too had to deal with chunder covered everything and commented after I apologised that it was okay, they remembered the times they had dealt with similar situations) and as our bags were with us we were able to partly change clothes so we didn't smell of sick and look like a pot of cottage cheese.
Remember I mentioned that Top Ender was the youngest in the carriage? This is where is gets important.
For the rest of the journey we sat in some spare seats in the carriage where the older children couldn't see us. It was as the smell permeated the small space that they all started to complain to their parents about it and about Top Ender having caused them this issue.
"Next time we will go by Plane" said Daddy.
Which we did.
Holiday