A Mothers Ramblings take on the Stories and Songs Meme

- January 29, 2010
I was tagged by Angels and Urchins in one of the best meme's around, a Stories and Songs Meme that was started by Brits in Bosnia. The idea is great one, you have to talk about a song that reminds you of something, that has a story for you. Not necessarily your favourite song or a even a song that you love, but a song that instantly takes you back to that time and place.

Now Angels and Urchins song was Queen’s Don’t Stop Me Now. Great song and it stirred up memories for me too, but as they had already chosen it I couldn't choose it! So I started thinking and shuffling through the music on the PC.

Now something you might not know about me and Daddy is that we LOVE music. There are 500 CD's in our living room on shelves. There are probably the same amount in a cupboard. There is probably that four or five times over in boxes in the loft. Luckily with Daddy being a technology genius they are also all available on the PC and so I can use any PC in any room (We have a PC in everyroom apart from Baby Boys and the bathroom) to listen to any track.

I have so many songs that mean something to me or can take me back to a time and place that I was going to mention a few before I got on with the one I finally settled on but whilst I was jumping through tracks I suddenly had one memory stand out that I knew I wanted to share and it all happened back in 1994. 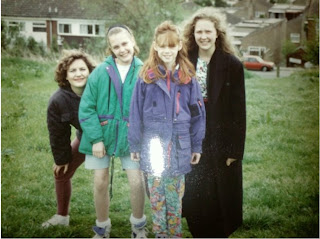 Technically this photo was taken in 1993, but you don't care about that do you?! I am (obviously) the one on the far right, and the only one not looking a fashion victim.

When this song came out I had just turned 15 (like three weeks before). I was still young enough that my parents were my world, (in fact I had just written a piece of homework a few weeks before about how my best friends were my parents and sister and I got an A***) and thought nothing of getting in the car with them at the weekend to go for a drive in the country as we were partial to doing.

This particular weekend was a beautiful warm and sunny day. The sky was blue, the air was so clear and I was sitting in the back behind my Mum looking out of the window at a field which looked to me like something I just wanted to run into like they did in Little House on the Prairie. My Mum turned around in her seat and told my sister and I to open our windows as full as we could and she started to open the sunroof and her window whilst my Dad opened his.

She then put a tape into the tape player and turned the volume up as high as it would go. My Dad was suddenly on a straight open road and he put his foot down so that we sped up as the opening strains of "Love is All Around" by Wet Wet Wet reverberated all around and as my Sister and I pretended to play air guitar and we all sang.

Thats where I go back to whenever I hear that song. To a time before I knew what really went on. To a time where all that mattered was I was safe and loved to a early Summers Day in 1994.

And now I tag;


Becky at Single Mummy
Cave Mother at Cave Mother and
Kate at Two men, a cat and me
Meme Music