I have never really been one to go off and make friends. As a child I tended to stick with those I was sat with on the school table and in later years managed to get away with not having many by claiming that I liked my own company better. 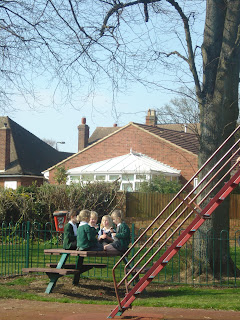 Really I just worried that people wouldn't like me and so would rather be on my own than not liked.

I try to make friends every once in a while. There are the Mums in the school playground who I can chat to about various bits and pieces, but they aren't the sort of friends that I could call on the phone and chat to. For a start I don't have their telephone numbers and stalking people is something Bear does, not me!

The playground Mums and I have mentioned in passing "Come for Coffee", and I have even arranged with someone that they come round, but they didn't as their little one was poorly. To tell you the truth I was probably more relieved than they were. I mean what would we talk about other than our kids?

On Tuesday one of the Playgroup Mums and I were walking out of school together as Playgroup wasn't on. We were a little disappointed and so I said to Chatty Mum;

"Well if you don't mind the mess you could come round to mine for a coffee?"

And I was ignored*.
I felt crushed. I had put myself out there and had been kicked back into place. I wasn't going to try and make friends again for a while.

And then I got a Direct Message on Twitter from Kassia at Working Mum. You see Kassia and I have worked out that we live about two miles from each other.

"Fancy meeting for a coffee when the roads are clear of snow?"

I replied back that it would be great... maybe making friends isn't so hard after all!

*By the way it turns out that Chatty Mum hadn't meant to ignore me (she stopped me that afternoon to make sure I knew that) it was just that she hadn't quite realised what I had said until she had got home. She's invited me round to hers for coffee to make up for it...
Family Life