Chess The Musical - A Review 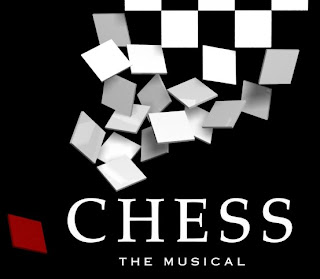 When Mummy, through illness, had to back out of a chance to see Chess at Milton Keynes Theatre, an opportunity to dust off my reviewers hat presented itself. Now, despite being a former Theatre Studies student at A-Level, I was never particularly good at writing theatre reviews. My soul exception was a review of Lionel Bart's "Oliver" in about 1995, which I thought was worthy of an Olivier award of its own.

You might, therefore, excuse me if I turn to the guidelines of 15 years ago to bring you this review.

1. Don't go over the top on the background.

Chess, with lyrics by Tim Rice and music by Benny Andersson and Bjorn Ulvaeus (of ABBA) was first produced in 1986. Although unsuccesful on Broadway, the West End production ran for four years. It tells the story of the rivalry between the top American and Russian Chess players and the woman who manages one but loves the other, played out against a backdrop of the Cold War.

2. Tell us about the actors

The stand-out performances in this current touring production come from the three leads. As American chess champion Freddie Trumper, former Eurovision contestant James Fox came across very well. He doesn't particularly attempt to adopt an American accent, but certainly manages all the mannerisms of the brash bad boy with attitude. As Russian contender Anatoly Sergievsky, Australian-born actor Daniel Koek is more believable. It can't be easy to talk and sing for over two hours with a Russian accent, but Koek pulls this off. The biggest cheers were rightly reserved for Shona White, and her portrayal of Florence Vassy. As well as getting to sing the famous "I Know Him So Well", she also sings a fabulous solo in "Nobody on Nobody's Side", and the rousing reprise of Anthem in the finale. The programme claims she was once on BBC's Pebble Mill, but I can't believe she can be old enough... 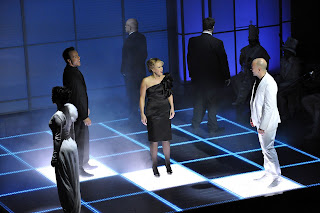 3. What about the production itself?

A concert version of Chess staged at the Royal Albert Hall in 2008 was described by Tim Rice as being the "official version". This current tour, with the exception of a couple of songs, appears to be very close to that version. The staging, however, is new again - with direction and choreography by none other than Craig Revel Horwood, best known as a judge on BBC1's Strictly Come Dancing. Great testament to the original West End staging, with its banks of monitors, tilting stage and multimedia elements, are echoed here in the set and video designs of Christopher Woods and Jack James. I was particularly impressed at the use of small mobile cameras attached to one of the performers musical instruments, giving us close-ups of the performers on the video wall, shot from right in the middle of the action. Speaking of the musical instruments, unbelievably 25 of the 30 performers play instruments in the show - their violins, cello's, a huge double-bass, electric guitars and so on are constantly on stage. The only musicians not seen are the keyboard player and drummer, who remain backstage. 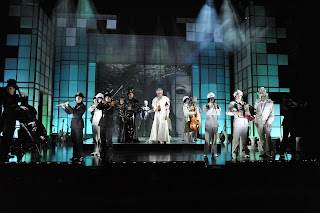 "There are a fair few swears" was the opinion of my guest (actually, my Mum). It's pretty clear this production is not for young people. Although I am in my thirties, I was probably the youngest person there - although Mummy tells me that is just as indicative of the type of theatre patron in general, rather than just this show. It's a most entertaining and lively show even if you don't know any of the songs, but the story is complex, and some knowledge of both Chess (the game) and the history of USA/USSR rivalry would probably make it easier to enjoy too.


One criticism that has been labelled at Chess before is the lack of a definitive version - but I see this as a positive too, if they change it regularly then there's always something new to see or hear - this was a fresh production, well produced and with all the technical elements up to par.

Chess plays at the Milton Keynes Theatre until 29th January 2011 and then moves around the country, ending up in Glasgow in April.
Review Theatre