- January 21, 2011
For Top Enders Birthday Party, Disney very kindly sent over a copy of Beauty and The Beast on Disney Blu Ray for the girls to watch. The Girls chose to watch another film and so when Top Ender went back to School a couple of days later, Baby Boy and I decided to watch the film together. We watched it on our TV, instead of on the projector and cuddled up together on the Sofa. 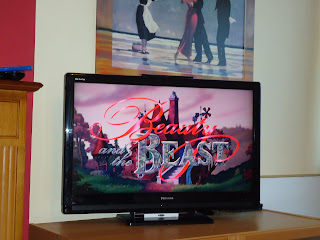 The film was just as I remembered it when it was released originally, and there was the previously cut song Human Again included which is a fantastic song and I am pleased to see it included in the film as originally intended. Something that really amazed me was that this was a Double pack, there is a Blu-Ray and a DVD in the box which means that we can watch the film at home and whilst in the car (or upstairs, or at Grannies, or anywhere that there isn't a Blu Ray Player!) and I think that this is a great bonus for families like us who only have one Blu Ray player. 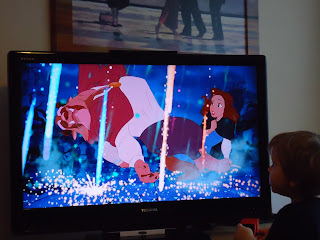 As you can see by the end of the film Baby Boy had made his way to stand in front of the Television and was quite impressed with what was going on, even going as far as telling Top Ender and Daddy that he had watched the best film about a Lion (The Beast, Baby Boy was convinced that he was a Lion) and a Girl.

The Disney Beauty and The Beast Diamond Edition Blu Ray Double pack that I had has an RRP of £23.99, but some quick searching found it for as little as £15.99.