Our Week of Maths Play

- January 28, 2011
I regularly play learning games with Top Ender and Baby Boy that they don't actually think are learning games. I have mentioned them before in posts such as Helping your Children with Math Skills and Helping your Children learn to Read. This week though The Play Academy at NurtureStore is hosting a Maths Play Carnival and I couldn't resist sharing a few ways that Baby Boy, Top Ender and I have been playing with Maths this week!

We started the weekend with some drawing. This involved Top Ender drawing shapes on the blackboard for Baby Boy to guess what they were. Every time he got one right (which was every time) he got a great big tick for having been so clever. This Brother Sister bonding time was helping both Top Ender and Baby Boy to learn their shapes which is an essential Maths Skill!

We moved on to Patterns. Baby Boy loves to watch Team UmiZoomi (mind you so does Top Ender) but he often claims that he doesn't have a Maths Power so we decided to practice our Pattern Power! We coloured in lines to make a pattern, we clapped patterns and we stacked the bricks in colour patterns. Top Ender had things a little more complicated and she had to match a pattern of numbers and colours.

One thing that Top Ender loves for us to do is to give her maths problems. As she brought a calculator with her pocket money this weekend she asked for some hard problems that she would need a calculator for. I wrote a long list of sums and Top Ender sat quite happily working out the sums! Baby Boy played with Daddy on the blackboard and whilst Daddy wrote out some maths problems and explained what the numbers were Baby Boy went for a more abstract approach... 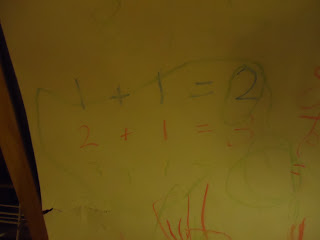 Baby Boy was under the weather on Monday and so the play with Maths was quite limited for him. We decided to count the number of times he was sick, the number of times he had medicine and the amount of time that he had been asleep. Top Ender had to work out a schedule for the week with times for certain jobs for various people. I think Top Ender quite enjoyed this as now at the end of the week she is still asking for us to work out more schedules!

When Tuesday came we decided that we would learn about different measurements. Baby Boy walked around the living room with the tape measure measuring anything that took his fancy. I then had to write these numbers down. After he was bored of measuring things (it was a long time before he was bored) we played with Toys asking out of a group of two items which was Big and which was Small. This then led on to us singing the theme tune to Big and Small from Cbeebies. Top Ender was again stretched with her game and she was asked to take measurements of all sides of certain objects and then to add them together. Top Ender had also been playing at School on the tables in the playground which I love! 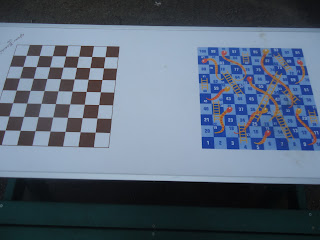 Top Ender had a friend round after School and together they played nicely whilst Baby Boy and I played with our timer. Baby Boy would set a time and then we would have to race around the living room tidying toys or doing a set number of exercises before the timer went off. When Top Ender and her friend came downstairs they made Pizza's for us all to eat for tea and whilst they did they talked about the ingredients they were using, not only the shapes, but the quantity and even basic fractions!

And yesterday Baby Boy and I decided that we would make some cakes. This involved Baby Boy having to look at the weighing scales and to help keep time of how long things were being cooked for. Plus we had to count the number of cakes that we made and how many we ate... When Top Ender had got home from her after school Hama Beads Club we decided that she had had enough of counting and so we didn't do any more. We did however eat cupcakes! 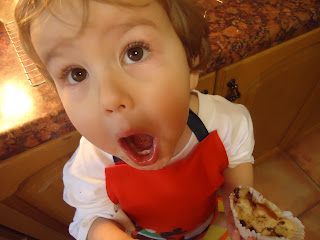 So what maths games did you play this week?
Family Life