Your Shape for the Xbox 360

- January 14, 2011
On Christmas Eve, Top Ender, Baby Boy and I spent most of the day with my Mum. We got home early afternoon and as we walked in the front door we found a missed delivery card. Knowing that with the snow and Christmas closing that this parcel wouldn't be scheduled for an attempt at re-delivery until well into the New Year, Top Ender and I decided to take a risk and drive out to the depot before they closed for the day. With Top Ender on the phone asking the company to stay open until we got there and trying to programme the Sat Nav as per my instructions we somehow made it to the depot in one piece and before the staff left for the pub! We weren't very sure what it was that was being delivered to us, but as we had been promised some chocolates, Top Ender and I were hoping that is what the box contained.

When we got home and got the box open we discovered that inside was an Xbox 360, a Kinect sensor and the Ubisoft game Your Shape: Fitness Evolved. I was gobsmacked. You see just before Christmas I was asked if I would like to review Your Shape: Fitness Evolved for the Xbox 360. I had said that I would of loved to review this, but that I didn't have an Xbox. Apparently now I have an Xbox. So the plan is that I am going to use the Your Shape programme everyday to improve my fitness, my health and to achieve the one goal that really matters to me this year; To lose weight.

So after some treats at Christmas and New Year (some rather nice Brie, if you must know) I started in earnest on January first, with my first work out whilst Daddy and Top Ender looked on. Top Ender decided that I should have a female personal trainer (something to do with me commenting on the Male Personal Trainers gluteus maximus being pert) who I quite often shout rude things at, especially when she is telling me to squat wider and lower. It's great though because I have a personalised fitness plan that is great for me and there are even some fitness games which Top Ender is loving playing with me! 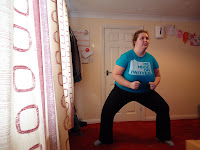 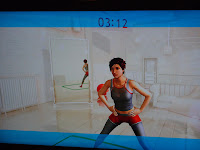 I have found that being corrected on how I am moving, being told to squat lower, raise my arms higher or what ever else it is that the Kinect senses I am not doing properly is actually making a HUGE difference to how I am exercising. I am putting in more effort than ever to make sure that I keep in rhythm, that I get high "scores" and of course see the calories tot up on screen.

If you want to know more then you can always join the Your Shape Facebook Page or follow them on Twitter at YourShapeGame and of course look out here for a proper review, vlogs of me after a session, video's of me during a session and lots more info on this computerised personal trainer... I have a feeling that this year it might just be Twitter that I'm huge on!
Weight And Fitness XBox Game Review