Do we know how to play?

- January 11, 2011
Over at Baby Genie I was mentioned in a post about do we know how to play with toys. Not just using the toys and playing a little game, but actually getting involved in the play process. Instead of using bricks as just stacking blocks, using them to build a rocket, to make a castle, to make a bridge. It made me laugh because yesterday Baby Boy and I were playing a game and I was trying to sort the words out in my head to make it a blog post because it wasn't just an ordinary game, it was a game where we used our imaginations. It appears that Catherine and I were on the same wave length although she got there first! 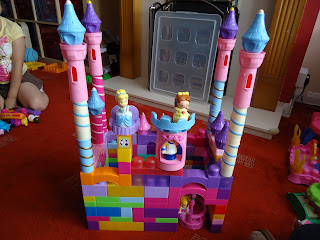 There are so many toys available to children these days. I partly joke with Top Ender that when I was little I had two toys and that was it. It wasn't quite true, but there were only two toys that I really ever played with on a regular basis. My sister and I had great fun playing with Sindy's, Barbies and Play-Doh. Although not always at the same time. One game that I remember very clearly was playing with Play-Doh making cakes and bakery products and then playing shops with them, with our wardrobe floors being the shop window. We would sit for what seemed hours making the cakes and then selling them all to invisible customers, and I am pretty sure that I didn't mind the colours getting mixed together back then...

Yesterday Baby Boy and I played with the Farm toys. We built all the buildings up, put the animals around and used the tractors to carry boxes of fruit to the storage area. Baby Boy then asked if we could add the Thomas Train Tracks to the farm. Now we had a little transport system to get our fruit to the supermarket, and even ended up getting the play food out to buy from the Supermarket! It really amazed me that Baby Boy wanted to develop his game further. Having the farm out was enough, we were having fun pretending to plant crops, harvest them and to store them. The animals were wandering around the fields and farm and having conversations about what they could see and what they were going to do later that week but Baby Boy wanted to do more. He knew that we could be having more fun with his toys.

After we had had enough of playing with the farm and trains we packed away. As we did Baby Boy decided that the box for the farm could be a rocket and so whilst he watched Little Einstein's he sat in his own rocket. We ate lunch in his rocket, we flew over a farm and looked at the animals from way up high. We flew over a blue mountain (the Sofa) and crashed in to a bog (of socks). It was fun just pretending and giggling together.

Of course these days a lot of people seem to think that the fun and the imagination has been taken out of toys as they are so related to a specific situation. Who says that you can't have a Knight in armour fighting Alien's in Space though? Who is stopping you from having your farm toys living in Fairy Land? All to often it is the parents saying this though. Like Catherine has said we see that the toy is a cup and saucer and so therefore we must play tea parties but we could play tea shops or we could play magic juice testing, or we could play china shops, or we could play Magicians! The ideas should be endless so what are you going to play today? 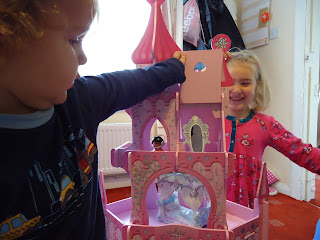 If you want to read more posts about learning whilst playing, why not read the Tots 100 Blog Hop.
Family Life