Gluten Free Quiche - One that *I* made!

- January 24, 2011
Many years ago I used to make Quiche quite often, then when Daddy was diagnosed as celiac working with home made gluten free pastry made making Quiche a chore rather than a pleasure. Top Ender and Baby Boy both like quiche and so I decided to give gluten free pastry for Quiche one more bash. Apparently the gluten free pastry understood that it was it's last chance and it behaved very nicely... I made up the pastry (200g Doves Farm Plain Flour and 100g Softened Butter mixed together using a fork) and instead of rolling the pastry out I just pushed it in to the Quiche dish as a base and pricked it all over before putting it into the oven for half an hour (gas mark 5). I don't use baking beans because I don't have any, but I find a lot of pricking stops air bubbles anyway! 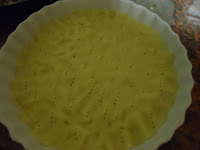 Whilst that was doing in the oven I slowly fried some chopped onion (one finely chopped) and some bacon pieces (about 200g) as I wanted soft onions with only a little colour. At the last moment I added a couple of handfuls of frozen peas as I figured that it would be good to have a bit of colour and also adding a vegetable means I get to feel virtuous about eating more than five portions of fruit and veg in a day. 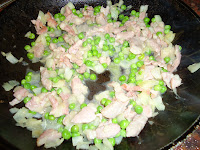 I had taken the pastry base out of the oven after fifteen minutes and scattered some chopped tomato (just one chopped up into little bits as neither Top Ender, Baby Boy or Daddy like tomatoes) over the pastry base before adding the bacon, onion and pea mixture. It looked quite tasty and I wasn't finished! 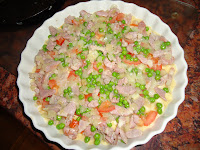 I added the mixed egg and milk mixture (2 eggs mixed with 300ml milk with a little salt and pepper) and topped the dish with some grated cheese (200g roughly) before putting it in the oven again for 40 minutes (Gas Mark 3). 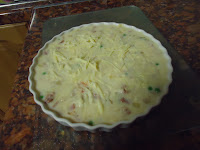 So as you can see it turns from a liquid/fluid/wet mixture to a set spongy texture which is a lovely golden colour. 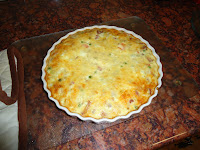 And as they say the proof is in the pudding, here is a picture of a slice of the quiche! 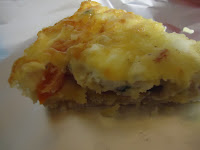