Fun and Games for All the Family

- January 01, 2011
I was sent a book to read called Fun and Games for the 21st Century Family and is a book that has listed ideas that incorporates modern technology, (such as as a MP3 player or a mobile phone) into games that you can play with your family. It is the sort of book that I would buy at the start of the year (that would be now then) so that during odd moments this year I could organise an activity from the book. Each game has a key in the margin of who the game is suitable for, the age of the players, the number of players, where it can be played (indoor/outdoor/in the car sort of thing) and what modern piece of equipment you might need to play. 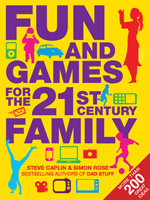 I read the whole book through the first time just to see what was in the book. I really wanted to see if there were indeed games that would be suitable for the whole family and hopefully a few games that weren't already something that most people were aware of. I was pleased to see that there were many activities that I wouldn't of thought of as making into a game for the family and plenty of old favourites with a modern twist too. There are several games that are suitable for the entire family and a lot that with a few minor adjustments could be made suitable for younger children or can be completed with help of an older family member.

There is a section at the back of the book where some of the "techy" stuff that you might use when playing some of the games is used. I thought this was great as for a family who doesn't have a self-proclaimed Geek for a Mother (or an incredibly-intelligent-computer-fixing-website-building-film-editing-photo-editing-blue-screen-using Father) it will give some simple and helpful advice on how they too can create some of the fun as seen in the book.

Fun and Games for the 21st Century Family has an RRP of £9.99 but it is on Amazon at the moment for £6.19. It is written by Steve Caplin and Simon Rose and has over 200 ideas, but will inspire you to create more games of your own and will provide hours and hours of fun for years to come.
Books Review