Michael Jackson: The Experience for the Wii

- January 09, 2011
We were sent the Ubisoft Wii Game Michael Jackson: The Experience to review. It really amazes me that people send me games like this, because they are the games that I love to play even though I have absolutely no dancing skills what so ever. I did think that I might have an unfair advantage over Top Ender and Daddy on this game (because my Sister was a huge Michael Jackson fan and so I had seen the music videos on loop for at least ten years of my childhood and I was sure that some of the routines must of been absorbed into my subconscious) but I didn't tell them that. In fact when Daddy suggested that we play on the projector using our wireless wii sensor bar I thought that it would be even better, as I could hide behind Daddy and Top Ender so they wouldn't see me not having to watch the dancing avatar performing but just dancing from my own memory! As you can see it is a big picture, about 80inches!


Whilst playing the game I was really amazed at the graphics as I found them to be superior to the other Dance games that I have played on the Wii (Just Dance, Just Dance 2 and Dance On Broadway). It was quite like watching a music video, but one that encouraged you to dance along, and then ranked you on it. It was great flicking through the song selections as I could hear clips of songs from Michael Jacksons back catalogue and Daddy and I were enjoying having a little sing-a-long! As we choose which songs we wanted to dance through, we choose songs which were easy to dance along to as we weren't sure just how hard this game would be. Top Ender was very pleased for it being easy as she had no idea what she was dancing along to, as the only song that she knew by Michael Jackson was "Beat It"!

The games range from Easy to Hard, (apart from one song, but I will tell you about that in a minute!) and although you can't choose to dance along to all songs on all levels, there was more than enough to keep us occupied for an hour on the easy and medium levels. I was actually surprised as in my opinion the difficulty ratings were more about how much you were dancing, rather than how hard the routine was. The only negative that Daddy could come up with was that some of the dance moves were repetitive so that you could learn the routine quite quickly. I pointed out though that this was the point of a dance routine, being easy to learn!

There is one game that was listed as something other than Easy, Medium or Hard and that was Thriller which was listed as Inhuman or Hard. I love the Thriller dance routine, I mean seriously everyone knows of the routine, everyone knows how Zombies Dance because of this one video and I wasn't going to be put off by a simple little thing as it being listed as Inhuman... So Daddy Top Ender and I decided that we would take a risk, we would dance the Inhuman level. All I can say about it is that it is as hard as it sounds. Dancing like Michael Jackson dancing like a Zombie really takes it out of you. I am pleased to say however that I did score a high score of four stars out of five (although according to the little star meter I was just off five stars!) and I was very pleased with myself... 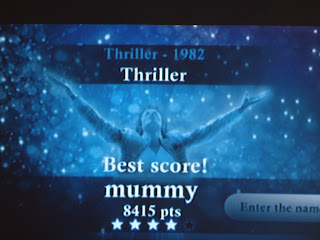 The game has an RRP of £34.99, but I found it for £24 online and I really do think that it is worth the money. This wasn't just an aerobic workout, but it was also a great trip down memory lane for Daddy and I, a good karaoke session for me (the less said about Daddy's singing the better!) and a further clarification for Top Ender just how crazy her parents are!
Wii Game review