- January 25, 2011
Here at A Mothers Ramblings we like our media. TV, Movies and Music are key to our entertainment - we already enjoy a Full HD TV, a Projector, and Blu-Ray player. We love to listen to music in the house and on the road. When the children are restless at bedtime, we don't object to putting a short film on for them to watch in their bedrooms on any night at weekends. And while they do that, Mummy and I will happily sit together on the sofa and watch something else. So how will the Western Digital WDTV Live Hub help?

One thing we struggle with is centralising our media. On too many occasions Top Ender has decided to watch the same film at bedtime as Baby Boy - problem, only one copy of the DVD... Or, we've recorded a TV show on my server (that I hide in the loft next to the TV aerial!) and decide to watch it in the living room, only for it to take 30 minutes to transfer over the network - or worse, I have to travel up a ladder to collect it on a USB memory stick!

The first-generation WDTV Media Player that I bought in 2008 didn't really solve these problems. It did allow us to make the main TV, and later the Projector, a media source of sorts - but only with what we'd loaded it with in advance. And by "it", I mean the USB hard disk that we had to buy separately, copy the media to, and then attach to the player. As a result, it was only switched on after intense planning - not something our spontaneous family are known for!

The Western Digital Live Hub (WDTV Live Hub) is the latest in that line of media players aimed at the home market. What marks this out as different from the others, is the inclusion of a huge 1 Terabyte (1,000Gb) internal hard disk, which means you don't have to cart your memory stick or USB hard disk back and forwards to the PC. Additionally, like the WDTV Live that came before it, this device can be attached to your home network - in our case by a wire to our internet router. It can also be attached wirelessly, if you buy additional hardware. 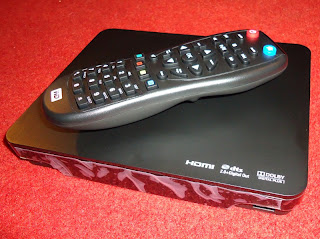 We were delighted to receive a WDTV Live Hub from Western Digital, and spent no time setting it up; which, being familiar with these devices, involved a bit of unboxing, and then connecting to the TV via HDMI and to the network by Cat5 cable, and switching it on. It auto-sensed the network settings, and promptly downloaded new software which required a few "reboots". The 168 page manual would lead you to believe that it is tricky to use, but actually the interface you interact with on your TV is very simple. 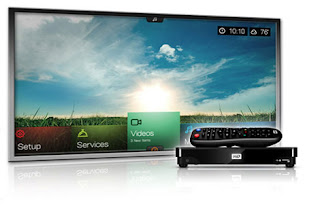 A quick trip to the PC to copy over a video (Windows 7 had already found the device on the network and alerted me to its presence) and we were up and running. There is optional software called WD Discovery included, but I found Windows 7 had enough tools built in to not require that.

The playback capabilities of this device are exhaustive. Are you ready for the list of supported formats!?

There, don't say I didn't warn you!

In practice, what this meant was it would play any file we could throw at it. From High Definition 1080 and 720 Quicktime Movies and "MKV" files, right down to 700Mb DivX and XVid files - it played them all. It was happy to play the MPEG-2 videos that my TV server recorded, and AVCHD videos from a Sony camcorder. One great feature is playing backups of the DVD's we own - using a free tool called IMGBurn we can create what are known as ISO images on the WDTV Live Hub and play back the DVD, complete with menus - whilst keeping the actual DVD safe from harm (and sticky fingers!).

About the only thing this can't play is DRM content - that is, material that is protected to prevent copying. This rules out BBC iPlayer and iTunes downloads, including rented items. However, one function of the WDTV Live Hub is downloadable video rentals via Blockbuster or Netflix - currently available in the USA only, so we couldn't give these services a test, but it's good to know this feature is built into the box ready for a UK rollout.

In terms of outputs, we have opted for the HDMI connection to the TV (cable not supplied), over which the HD signals pass a treat, and the Composite connection to feed our standard definition projector. Admittedly the picture suffers when using the Composite output to play a high definition video, but this isn't the fault of the WDTV Live Hub - more the Projector that can't handle the resolution, although it does a great job of downscaling it.

Likewise, on a Full HD TV, the unit does a great job of upscaling standard definition video, although depending on the quality of your TV, your mileage may vary.

On the back are enough ports to satisfy every TV - HDMI for the full HD signal, Component, if that's your TV's preferred format, and Composite - for older TV's, possibly via a Scart adaptor (not supplied). There are also two USB ports - so when you fill up the internal disk, you can add more storage. You can also use the USB port to syncronise automatically with an existing portable drive, just by plugging it in.

Built-in features allowing you to view Youtube videos and access Facebook have gone largely untouched - their interfaces are clunky to use from a TV, the PC is better for that. Although, you can plug a USB keyboard in the front of the device to aid in typing in if you wish.

We've given the device a big "real world" test, as Top Ender had a cinema party for her birthday earlier this month - although the group of giggling girls found the popcorn, pizza and fizzy drinks great, they were less impressed - in fact even to the point of not being surprised - that we had such technology, guess that's the world we live in these days!! But the WDTV Live Hub played without a hitch, and a great time was had by all.

As funds allow, I am steadily upgrading all the PC's in our house to Windows 7 - one benefit of this is the "Homegroup" function, which simplifies networking amongst all the computers. This has meant that the WDTV Live Hub can play videos and music from the PC's around the house without needing to set up any complex settings. Likewise, the PC's and other devices can play content from the WDTV Live Hub. We think nothing of letting Top Ender watch a video from the hub on the PC in her bedroom whilst Mummy watches a different film downstairs, and I stream music from it to my iPhone - all at the same time.

And this forms the core of Mummy's intentions in the coming year, to simplify our media sharing. As a family who really like our music, movies and TV shows, with the aid of the WDTV Live Hub, we're getting to the point where we can locate all our content in one location, and access it from anywhere in the house, on any connected device. With the aid of Orb, a free media server software that I run on my server, we can even connect to the WDTV Live Hub and watch our content on any internet connected PC in the world, or over a 3G network to my iPhone.

As the year goes on and Mummy's ideas for the digital home continue, I have no doubts that the WDTV Live Hub will feature at the centre of these - one immediate plan is to make the entertainment even more fun via some surround sound speakers in the living room, I'm satisfied the WDTV Live Hub with it's HDMI and S/PDIF outputs will make short work of that!

The WDTV Live Hub has an RRP of £199.99 although a quick search reveals it is available to buy from Amazon.co.uk for £163.99.
Review Technology