- March 05, 2013
One of my favourite films is 9 to 5. I love the Dolly Parton theme tune, the idea of women taking charge and making the world better and who doesn't love a comedy set the year they were born? I like to read a lot of websites about the Theatre Scene (I would have made a great actress) and when I heard they were going to make the film into a Musical Stage show I was a little worried, how could they improve on this great film? I needn't have worried because the show is great and has been cast perfectly. 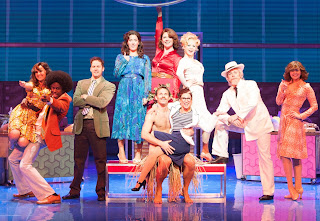 If you love the film, have a nostalgia for the late 70's early 80's or just want to see a feel good musical you'll love the show. Actually I don't think anybody could hate this show, because there are moments from Natalie Casey and Amy Lennox that will just make you grin and realise that like them you've been in a predicament fairly similar in the past... although I should make it clear I never kidnapped my boss before. Or fed him Rat Poison. Or shot at him.

I thought about it though!

The songs compliment the show, and as in all great musicals, instead of sticking out it seems natural that the characters break into song every now and then and we see deeper into the Characters motives for how they are the way they are, or what they are thinking. I've added the Soundtrack to my wishlist for Mothers Day gifts and I'm also hoping that when I'm as old as Bonnie Langford I'll be as flexible as she is!

I was really impressed with the costumes (and in particular one very quick costume change by Jackie Clune that should probably go down in the record books), the sets and the general ambience of the show and several "personal touches" from the cast and Dolly Parton. As we left the Theatre the general buzz from the Audience was how great the show was, and how brilliant the cast were. It seems a bit stalker like, but I wanted to write the entire cast and crew a little note to let them know how much I enjoyed the show and I don't think I've ever wanted to do that for the cast of any show before.

The show is on tour around the UK at the moment and is stopping at Milton Keynes until the 9th March, so go and see it and as Dolly said tell all your friends about it too!

We were given two tickets to see the show, and I took my Mum after all she was the one who first introduced me to Dolly Parton.