- March 10, 2013
When the latest delivery of Fish turned up during the week, thanks to Fish Is The Dish, there was a net bag of Mussels included. I was worried, it's been hard enough to get Daddy to eat more fish and even though he had once eaten Cockles and Mussels on a little mini break to Clacton in 2003, I doubted he was going to eat them again unless I could disguise them somehow. I looked up a lot of recipes and finally found one for Curried Mussel Soup that I thought that Daddy would like and arranged for my Mum to come round to share the meal with us as I thought some adult encouragement to eat our dinner might be good for us, plus the recipe was for six and I can't each that much soup. 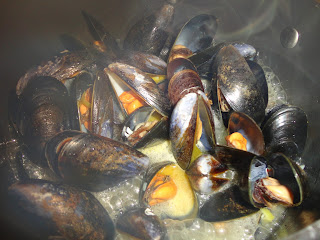 I made a couple of adaptations to the recipe, I used 300ml of cream instead of 500ml, 400ml of White Sorelle instead of White Wine, I used three small potatoes instead of one medium one, I didn't include any Saffron (it cost too much!) and if I were to make it again (which I will) I would make it with 2 teaspoons or possibly even a tablespoon of curry powder to give it a bit more flavour and power or maybe more cayenne pepper, for more of a kick. My Mum was great to have around as she gave me a great tip for getting Mussels out of their shell, she said that you have to use a second Mussel shell to pinch the Mussel out of the shell and that it makes it a lot easier and faster! 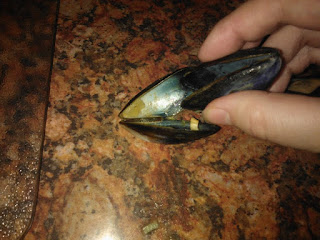 I snuck a couple of Mussels into the children's dinner and watched Big Boy eat them without a second thought and although I didn't see Top Ender eat hers, she confirmed that she thought they were mushrooms and so ate them as she knew I would tell her she had to. I'm such an evil Mum, aren't I? 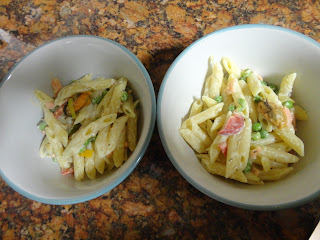 I did get a bit stressed making the soup, but that was because I was trying to entertain my Mum, keep an eye on the children, I was stressing about the car (the anti-roll bar drop links has snapped or something, meaning we can't drive it until the Garage fixes it) and I was trying to make the children's dinner at the same time. I know if I were to make it again it would be much easier.

Daddy, my Mum and I all agreed that the soup was lovely. Daddy thought it might be nicer to have it being a bit thicker (he wanted to add corn flour to thicken it) but my Mum and I managed to convince him that it wouldn't taste as good if it was thicker. 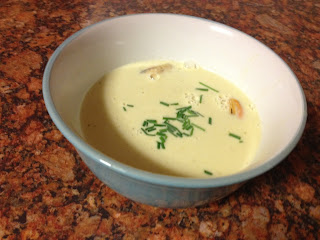 After having made the Curried Mussel Soup I'm feeling a lot more confident in using more "exotic" fish (I know it's not that exotic really but honestly who here eats Mussels at any time other than when they are at the seaside?!) in my cooking, and I'm currently thinking up how I'll use the Scallops that were delivered too.

Do you stick to regular ways to eat fish (fish and chips, fish cakes, tuna sandwiches and that sort of thing?) or are you more experimental than me and eat what I'm calling "exotic" fish?

We were sent a box of fish as part of the Fish Is the Dish Healthy Happy Hearts campaign.