When In Paris - The Jardin d'Acclimatation

- March 24, 2013
On our last day in Paris during our Summer visit last year, we were faced with two problems - the first was that the queue at our planned destination - the Louvre - was about half a mile long, and the second was the weather - no, it was the opposite to the usual weather problems, it was in fact one of the hottest days of the year.

A quick bit of Googling for alternative opportunities for the day, in Paris, with a family, and we decided to try the Jardin d'Acclimatation - an amusement park with a zoo and other attractions in the centre of Paris, and we had never heard of it before. The website, and a few other reviews, suggested it was worth a look, so we hopped on the Metro to Les Sablons, from where it is just a 5 minute walk to the entrance - a 5 minute walk that appeared to take us from the busiest street in Paris to the middle of the countryside! 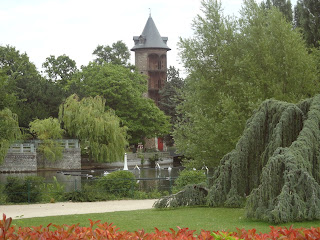 In fact the Jardin d'Acclimatation sits at the northern end of the Bois de Boulogne, a 2,000 acre green space roughly the same size as Richmond Park in London. For fans of tennis trivia, Roland Garros - home of the French Open - sits at the other end.

So, what does the 50-acre Jardin d'Acclimatation have - well it has a narrow-guage train that you can ride around the park, an amusement park with child-friendly rides, a puppet theatre, a zoo, small farm and aviary, playgrounds, a paddling pool and a lot more.


After soaking our legs on water mist sprays inside the main entrance, we made a bee line for Le Petit Pavillon du Jardin for lunch - where despite my attempts at my very best French, I was delighted when the server said "It's ok, you can speak English here". A quick Nuggets and Chips (and Caramel Ice Cream for Top Ender) and we set off into the park to find the paddling pool - after all, the hottest day of the year calls for a bit of cooling off!

After a very short, sharp summer rain shower en-route (opportunity to shelter under a tree and look at the Goats on the farm, walk along the edge of the Enchanted River and laugh at ourselves in the house of mirrors), Top Ender and Big Boy quickly changed into their swim kit, and headed for the paddling pool - Top Ender was quite content to run in and out of the shallow water and play in the sprays and jets, but Big Boy tired quickly of the noise (and the heat) and so he dressed and we headed for the playgrounds in the shade of big trees. Particularly impressive were the First Aid wardens who patrol the park on bicycles - we witnessed a graze being patched up with no fuss. The pool also appeared to have life guards on duty. 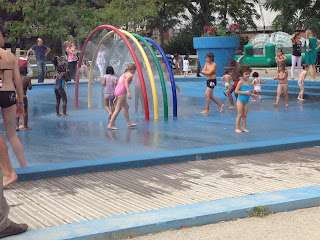 The Jardin d'Acclimatation, which was opened in 1860 by Napoleon III, has a very reasonable entrance fee at just €3.00 per person for anyone over 3; half-price for "Seniors". The playgrounds, zoo, farm, the paddling pool and several of the other attractions are included in the price. 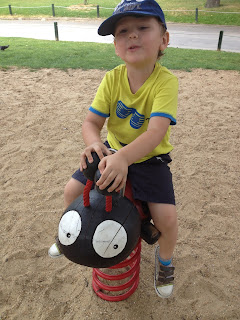 There are extra charges for the train ride, and for the rides in the amusement park - these are paid for with tickets; these are as low as €2.33 each, if you buy a book of 15. As we only had an afternoon there before needing to head home, we didn't go into the amusement park - but it had a range of rides from teacups and small rollercoasters to chair-planes, bumper cars and a carousel. 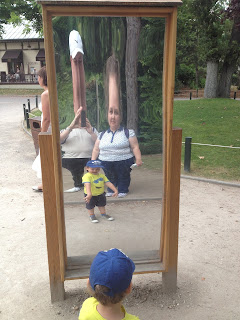 On the way out, we took a scenic walk along the tree-lined paths at the back of the park, stopped to play on the outdoor Gym equipment, and marvelled at the curious architecture of the Frank Gehry designed Louis Vuitton Foundation building taking shape along the southern edge. 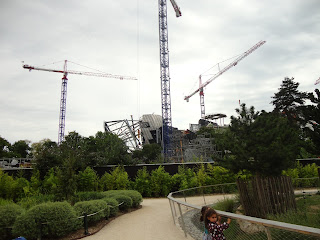 The Jardin d'Acclimatation gets a thumbs up, and if you are ever in Paris and tire of the usual tourist attractions - especially if you have kids in tow - this is a great place to spend a day, and even if you avoid the amusement park there are still plenty of activities to enjoy without it breaking the bank.
Paid Day Out