- March 14, 2013
A few weeks ago Daddy and I were flicking through the TV Channels trying to find something to watch. For some reason we stopped on a TV programme that was a competition between different sandwiches, with each sandwiches creator hoping their creation would be crowned best sandwich in America. Despite not being hungry, we really wanted to try some of the sandwiches and seeing as how funds are a little short at the moment and we can't fly to the restaurants featured in the TV programme, we decided to recreate some of them at home. I'm actually having a lot of fun recreating the sandwiches as seen on the TV programme, and we've discovered a lot of different flavours that when fused together taste amazing. Who would have thought that Duck and Cheese went so well?! 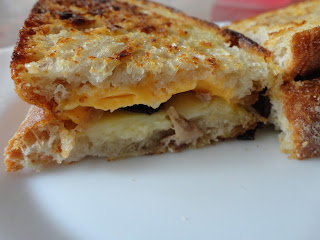 It's not the first time that I've used TV programmes as inspiration for what to cook. I used to be a bit like Robin Williams in Mrs Doubtfire, sitting watching the cookery show making copious notes on what I had to do to make the dish they were easily knocking out in a few minutes. It was made easier, when Daddy put a TV in the Kitchen for me so I could cook along with the TV shows I was getting my dinner inspiration from, but I soon reverted to watching Neighbours instead.

I'm sure I'm not the only one who uses TV programmes as inspiration as what to cook, I remember a couple of years ago going to a local cake decorating equipment shop and finding that they were all sold out of edible glitter after it had been featured the night before on a Cookery Show. I was okay though, as the staff knew I'd be in and had saved me the glitter that I had mentioned I wanted and our Christmas Cake that year was a glittery golden delight.

I do see quite often in the Supermarkets, notes on shelves pointing out an ingredient that TV Chefs have mentioned or have used in recipes to help customers find everything more easily, and I think it's quite funny how we can be influenced to make some supermarkets run out of certain ingredients, or even getting more supermarkets to stock an ingredient. Goose Fat is my favourite item that all the Supermarkets I go to now stock, thanks to it's increase in popularity because of TV Chef's endorsements.

What product are you hoping will be the next big thing so you can buy more easily?
Family Life